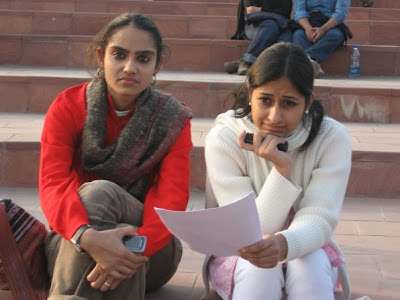 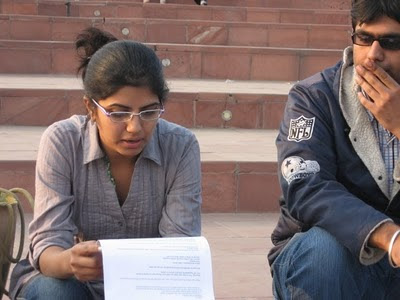 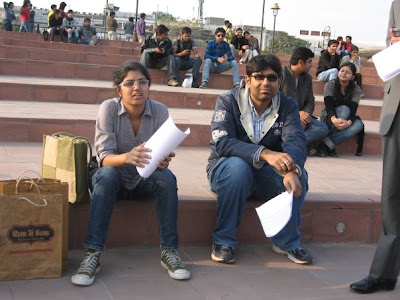 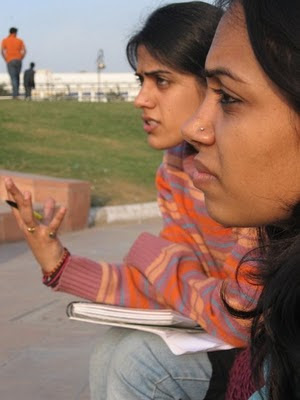 The meting commenced with a ‘stranger’, Mr.Viral Tyagi, approaching one of the BN members, Ms. Purba, trying to advice her on what she was wearing. The conversation with him revealed that the person was drunk (at a public place) and his had no control of his senses. After arguing with him for sometime, the group decided to ignore him.

The meeting formally was initiated by Purba who shared the Agenda with the volunteers present. There was a formal introduction that each of the volunteers were asked for sharing their experience of eve-teasing and street sexual harassment in the place they hail from.

Ridhima, one of the volunteers had a similar experience to share as that of Prabhleen as both hail from Raipur, Chhattisgarh. They shared that the local transport in Raipur is individual based as most people have their bikes and two –wheelers to their disposal. So, eve teasing becomes common, as there are instances when one is followed throughout the way to just make a comment or make the other person uncomfortable in the manner possible. There have been instances when the cloth wrapped around by a girl on her face is pulled out to open, making it utterly traumatic for her.

Varsha from Nagpur added to the conversation, by articulating her experience of eve teasing in the city. It was noted by her that one has to change ones dressing sense to feel a part of the larger society. She shared that it was the mentality of the people that makes all the difference.

It was Neeraj, from Chandigarh, who claimed that it was not the city per se, but the basic amenities that one is exposed to and the infrastructure or the lack of it that affects the mentality of people.

But, Varsha, had a different story all together of her friend from Kerela, who moved out of traditional barriers laid by the society on her sense of dressing. So for her it is that the more the society tries to suppress some one, the more the number of cases that emerge.

Swati, from Ghaziyabad, shared her nightmares when she used to travel in buses to college and the comments she had to bear. She said she remembered this one time when she was asked by this person who ‘advised’ her not to wear cut sleeves to tuitions as it attracts wrong attention.

There was a sudden shift in the session, when the group conversation highlighted the fact that the degree of acceptability varied from society to society. For instance in Rajasthan, a woman’s attire is entirely different and what is considered to be ‘revealing. Also another such case was that of rural Bengal, where a woman is not required to war a blouse underneath.

But, in Tamanna, another volunteer’s case, it was embarrassing for her when she wore a sports skirt to a Basketball Match and was called name thereafter based on her outfit.

But it was agreed by the group that it was not the attire that can justify eve teasing. Swati shared that recently when she was traveling by Metro, she noticed a girl who was ‘decently’ dressed in a t-shirt and denims, slapping a guy who had been staring at her for long thus making it uncomfortable for her.

Chandrashekar added that one of his friends was actually found staring at a woman wearing a ‘burkha’ with a ‘hijab’, with no possible scope of admiring her beauty except her eyes.

Tamanna said that she no longer smiles at people with the fear of being mistaken by them and has now been only seen frowning at others. In fact, even if someone appreciates your beauty, you really don’t know to take it positive or not.

It was to this that Ridhima added that genuine conversations are not possible these days.

The session thereafter proceeded to its next part where all the volunteers were given this exercise of staring at a stranger around and observing his/her reaction. After the exercise, there were a few questions that were asked to the members. Prabhleen said that the girl she was looking at seemed approachable and that she seemed comfortable as both understood that they might be familiar to each other. But, for Ridhima, the guy whom she stared got at first conscious and is now wondering what happened.

Swati said she avoided staring at the males around and instead shared a look with one of the middle-aged couples who gave a confused look as well.

The session moved to a discussion on the reason for all the volunteers to work with Blank Noise.

Neeraj felt the need to address this issue urgently. Changing the mindset is what Neeraj wishes for and aims at.

Empowering women and transforming the society to a better place to live in, is what is Chandrashekhars’s view for which he is associated with Blank Noise.

For Prabhleen, it was the issue and the creative and pragmatic process adopted by Blank Noise that urged her to get associated with Blank Noise apart from her academic interest in social legislation and gender.

For Ridhima, it was the issue of gender that instigated her to work on related projects for a better understanding on the same.

Varsha’s idea of her association was to help her as eve-teasing was something that she had experienced many a times.

Swati shared her view with Varsha and said that the girls change their lives because of certain restrictions. It is time for a larger change in the society.

Kriti, how works in the field of education said that we all want to connect and should do so instead of segregating on the basis of gender. A girl’s choice of mobility gets restricted when it comes to her safety in the evening. For her, a balance has to create between the ‘Indian’ and the ‘Western’ culture and ideology that are coming up these days.

She was interrupted when a few members did not agree with the concept of ‘westernization’ of the ‘Indian culture’. It was Purba who gave the example of a saree that is considered traditional, but if not more at least equally revealing as that of any short shirts worn under ‘western influence’. Moreover, again it was not the dress that one needs to change.

For Kriti though, a change could only come if the males sit together and discuss about the issue and get educated on it. But, Purba and a few others consented that it was not the teaching that could bring about a change. Tamanna added that it should work this way, ‘It is my life, I am not affecting you, so don’t affect me’.

But, Kriti still felt that is way too much to romanticize the idea.

The session proceeded with members sharing words, terms etc. that come first in their mind when one thinks of eve teasing. The following words were included-

For Ridhima it was ‘Disgusting’.

For Prabhleen the first word that strikes her was ‘Mall’(in Hindi).

For Swati it was the uncomfortable noises that the boys try and make.

For Neeraj it was ‘Gulab Jamun’ and ‘Jugaad’.

For Purba it was ‘pushy’ as some one was trying to intrude in her personal space.

The session also saw sharing of personal experiences by the members who faced street sexual harassment at all sort of places, during any time of the day and with any means of transportation, be it Jama Masjid, or the Chandini Chowk market that leads to it, or be it a richkshaw or an auto when is traveling from one location to another. There is nothing much that is safe.

Purba and Chandrashekhar also shred their involvement with the previous projects and their experience during the same. They encouraged the group to take action and decide on the venues where the coming interventions could be located. The following venues were decided-

For the event, it was Chandrashkehar who has volunteered top coordinate the entire process and designs the next intervention of Blank Noise. The next meeting of the group was decided to be the 2nd of January, 2010.
Posted by Blank Noise at 27.12.09

Too bad I missed it this time. Would try my best to be there next time.