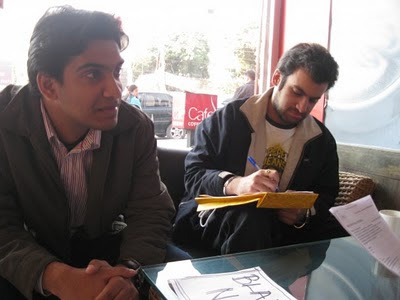 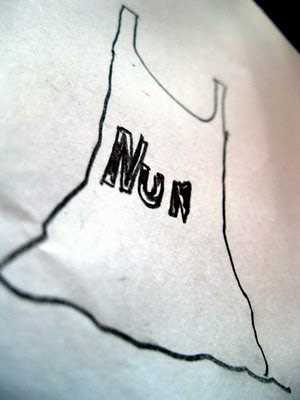 Meeting started at 15:05 hours. Placards were placed to identify the members which were received with weird stares by the cafe workers(Don't worry were not going to start off a protest march against the formation of Telangana).Here's how the meeting went.

1505 : Priyam, the script reader read out the objective of the meeting. The following from our group were identified as

15 10: The meeting started off with it's first exercise. Volunteers attempted to make an eye contact with a complete stranger and smile after the contact was made.We had our opinions to share.

target. Apparently he was wondering what we were upto so it made my task

easy. Unfortunately, my smile was exchanged by a weird look.Obviously ,he didn't

feel comfortable and neither did I."

Amit- "I too found the same target.However, I met with the same result.I guess he didn't

Prabal-"I had the same target.He was an easy target.He didn't smile back just had an

awkward look on his face.He didn't find it threatening, just uncomfortable. I felt

away.So I really can't say how she felt about it.

15 18 : Priyam continued with the script.Volunteers were asked to introduce themselves and give

young adults with special needs. Her concern apart from that of every girl related

to eveteasing was sexual abuse of people with disabilities too.

Prabal- A student of BTECH from UPES , Dehradun he is perturbed by the kind of

Amit- Amit is a Law student from Gujarat, he got really concerned by eveteasing

when one of his own close friends got very affected by it.

Dhruv- Dhruv is in the Merchant Navy. His views were that eve teasing has been a

common topic of discussion amongst the people. One can never finish reading the

newspaper without finding an article about rape, sexual harassment or

misbehaviour with girls. Starting with small steps to create an awareness among

the people can make a major difference.

Aviral- Aviral is studying law at the Dehradun Law College.From his personal experience,

He finds it quite appalling to see the crowded buses in Delhi. For ladies it has

always been a nightmare..Having worked in call centres he feels Delhi will

definitely top the list when it comes to sexual harrassment".

15 45 :What are the words that come to your mind when we say street sexual

The response was quite interesting.

WOMEN, A WAY TO VENT OUT FRUSTRATIONS,PRE-CONCEIVED NOTIONS, NO

ACTION AT HOME, HAS TO DO WITH THE UPBRINGING OF THE INDIVIDUAL……….

15 51 : What does Blank Noise mean to you/what are the words that come to your mind when we

15 55 : Everyone drew a garment they believe girls experienced harassment in(for the boys) and

Aviral's - Aviral drew a short dress with the words NUN printed on it.He sure has a keen

sense of observation.Short dresses are asking for trouble from frustrated

wolves.However, to contradict this if a woman feels hot why can't she wear short

tees she will get sexually harassed.

means bulging eyes and through the roof testosterone levels.Again, one can put

Priyam's-Priyam drew a salwar kameez.She too had the same opinion as Amit that how

much a girl is covered doesn't make a difference,having seen a friend of hers

Dhruv's- Dhruv drew a short t-shirt and a mini skirt.

of concern at all.Some see them as a source of pleasure,that's it.However, even if a female

has chosen prostitution as her occupation or as a dancer in a bar, when she is off working

hours and goes to say watch a movie or shopping, people have no right to harass her. As

mentioned in the letters, women are citizens who have the right to go wherever they

choose to. Another interesting point noted was that MARITAL RAPE is not a crime in

India.One would think that education can curb the situation but what about Shiney

Ahuja? He is well educated, comes from a good family and

1630 : I NEVER ASK FOR IT CLOTHES COLLECTION DRIVE

Barista, Indira Nagar being a more convenient location for everyone. To recapitulate,

everyone was satisfied with the way things turned out. Although we were just 5 of us, it

didn't discourage us. Next meeting, we've promised to get atleast one more volunteer

each, hoping to get a positive outcome then also.

Hey friends,
Felt very happy to see that you guys are at laest taking some steps for removing this dreadful menace of eve-teasing and especially street harrasment in Dehradun.
Would love to be a part of this campaign.