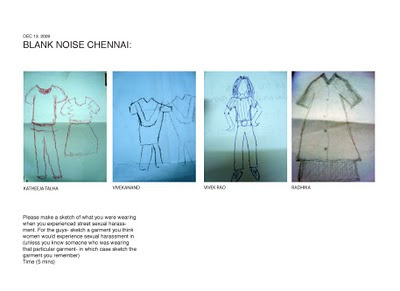 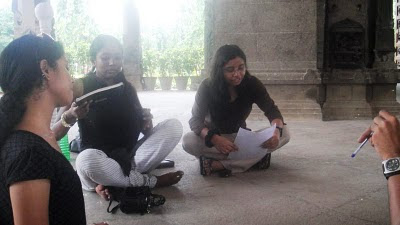 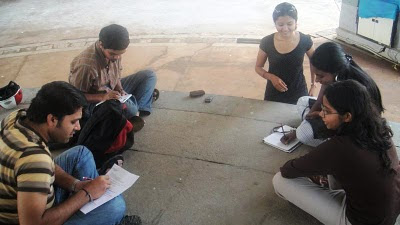 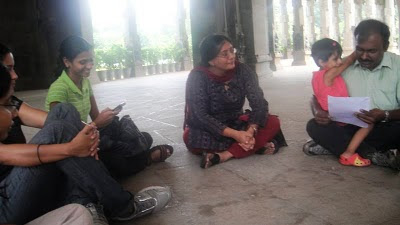 The Blank Noise volunteers met up this time in the green environs of Gandhi Mandapam.A apt place,since Blank Noise is a non-violent and peaceful means of protest against street sexual harassment,legally termed as 'eve-teasing'.

The first group task was to identify a stranger,make eye contact and smile at them. There was a lot of hesistancy, especially among the men as they didn't want to appear like perpetrators of street sexual harassment or disturb the many couples in the park. Vivek said the person he made eye contact with looked confused at first and then ignored them, Prithy and Kingsley both said that their 'subjects' looked confused and then smiled back, Sathya said the person looked around a bit to make sure the smile was directed at him and then smiled back, Vandhana and Katheeja smiled at the same person, who gave them a very vary look and moved away and Vivekanand said the immediate response he got was a smile and that it was probably because of his lovely daughter he had brought to the meet.

Shreesha and Radhika joined us a little later, after the first task.

Prithy, a PR manager said she chose Blank Noise because she was angry at all the people who let the perpetrators of the hook.

Radhika, a potter said she was tired of how society saw unmarried women as free game and 'available' and wanted to voice her protest.

Vandhana said she was here bacause she wanted public perception about 'eve teasing' to change.

Katheeja was there because she didn't want to be the helpless victim and she wanted to be a part of the process against it.

Sathya quoted an incident of how he was a spectator of street sexual harassement and couldn't help because the harasser told him it was none of his business since the woman didn't complain. He was in the meeting because he wanted to do something.

We all agreed on one thing,that 'Street sexual harassment was no way not acceptable'.And that we were looking to Blank Noise as a means to solve the problem.Also,it's the first time in the Chennai meets,that the participants were not all female ..horray Blank Noise guys!

Next,we made of sketch of garments we were harassed in.The guys drew pictures of garments they thought women would be harssed in.Different viewpoints emerged.The guys felt that short,tight and transparent clothing would lead to harassment.We gals showed our pictures .. a couple of us had drawn loose,shapeless clothing,and some our school uniforms.

Harassment doesn't really stem due to the victim's clothing,it just stems from the attacker's peversions.

We also read out the letters of Blank Noise action heroes.

Shreesha said how her job as a journalist requires her to work and travel late and narrated that street harassement was very common experience for her. She spoke of her most frightening experience when a person on the road started following her in the night and came upto her apartment till the security posts allowed him to. Katheeja told the group an incident which occured when she was 13, when a man asked for directions and then showed her his penis. Radhika spoke of how some men brazenly stand in front of her house and stare at her when she is sweeping the portico and refuse to move, claiming that they were on the road. This led to the discussion of power dynamics in street harassment. Vivekanad told us about a colleague who was pursued by a man in a bike and how that led to an accident. She fortunately remembered his registration number and the cops were able to track him down. The case is still pending.

We decided we would split the tasks of translating them into Tamil amongst ourselves.

Radhika had to leave at this point. She said, 'To me Blank Noise is about breaking the silence and I'm glad I broke my silence today'.

We talked about the clothes drive ..where clothes which you were harassed in are being collected,as a part of the "I NEVER ASK FOR IT' campaign..We decided to collect clothes ..from our friends,family,domestic help and office.

We all exchanged id's,visiting cards and decided on a tentative meeting point. Vivek agreed to be the next meeting coordinator.We decided tentatively to have our meeting in the 1st weekend of the New Year. We exchanged warm goodbyes and went our own way.