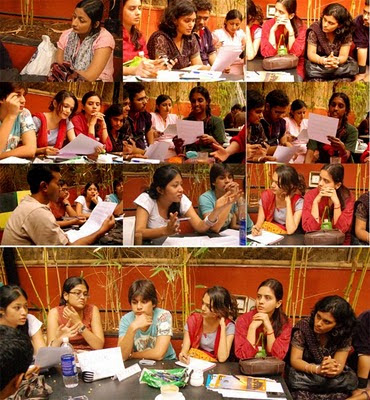 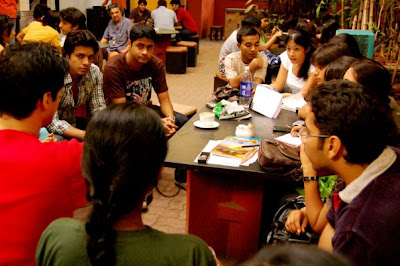 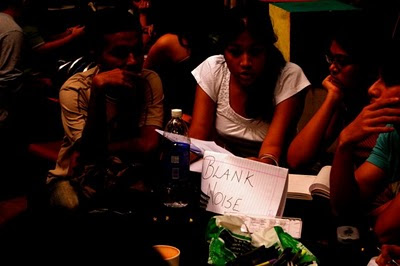 The meeting started with a short introduction of all the volunteers which was followed by the smiling activity.

The smile-at-a-stranger activity turned out to be a different experience for all of us.

Most, like Mithila, Trushant and Somek were comfortable with the activity. However, responses varied from the person being smiled at looking back puzzled and even running away to saying a " hello" back. It was not viewed as being threatening by any of the volunteers.

What could be noticed where that women, especially when being smiled at by men, felt uncomfortable and did not respond back. Men were more forthcoming and smiled back. Some volunteers chose to challenge their comfort levels further and smiled at people from the "labour" classes. Many got a slight or controlled smile as strangers tried to decide if they were supposed to be polite or think they are freaks!!

I think this activity let us try to go beyond our comfort levels. Even if we could do it usually, we would have chosen someone from the same gender, but the explicit instruction to try and choose someone from the opposite sex made us try a bit harder. I think at the end of it most of us were more comfortable about holding eye contact with some one we do not know. Which is quite different from the way we usually behave.

Next we discussed why we were there. Personal experiences were shared.

Aparna spoke about an incident which had happened to her mom. Her mom had once been harassed as men hung used condoms on the train compartment to intimidate the female passengers. This incident came to us as disgusting and lowly. Yet, the mentality of the people came through easily.

Ranjana also felt that people become so accustomed to being teased on roads that they find nothing wrong with it. Dharam brought up this interesting view point that politicians have never addressed the issue, deeming it as too trivial. And thus, each of us have to talk about it in order to solve it.

Nainy's own experiences has taught her not to feel guilty any more. And that was repeated by most of the volunteers, which seemed to back up the Blank Noise ideology ( No one asks for it). Most of the female volunteers had faced harassment in public transport. And irrespective of which class, place or city they went in, women were always treated with that attitude.

What stood out was that men as well as women had risen their voices about the issue, either because they had faced it themselves or had seen someone face it. All of us wanted a solution and wanted to speak about it. Rizwan's experience just made it clearer that we often just become mute spectators, in spite of the guilt conscience afterwards. Being a spectator is probably just as bad as being a perpetrator and a collective effort is needed to identify and address it now.

An interesting facet was brought up by Somek and Satish. Violence happens inside closed walls. And unlike street harassment, where people can raise a voice, most victims do not speak against domestic violence.

What we could gather from the various experiences was that street sexual harassment can happen anywhere and anytime, irrespective of the gender of the victim. And unless it happens to someone close (or herself) no one takes interest. It is time for that mentality to change.

Next we went on to discuss what blank noise meant to us. A couple of interesting words/ phrases came up.

BN to us means:

initiative,platform, for the masses by the masses

One of the more interesting ones was how Koel interpreted it. "Blank" to her is the feeling or numbness you get when you are harassed and "noise" stands for the noise you need to make, or the fact that you need to protest.

Next we made sketches of the clothes we were wearing when we had faced eve teasing (the guys drew clothes that they feel any victim may have worn). Most of the sketches were of casual clothes, nothing revealing or overtly sexy. A normal salwar kameez, a kurta, jeans and t shirt and even a school uniform. The school uniform incident was shared by me, and Mohnish asked us to read on the Indian Penalty Law which talks about a 'good' touch and a 'bad' touch.

Manou made an interesting observation. He drew a sketch of a girl- complete with a cap and gloves and jacket. He said that a girl can be eve teased while wearing anything. Clothes have nothing to do with it. Neha also pointed out that sometimes girls themselves make other girls feel uncomfortable. The way women stare if someone wears a more"sexier" or "daring" dress, goes on to say they feel that " these girls are just asking for it". It is not true. No matter what we wear, it is our bodies, and as long as we don't harm anyone else, and feel comfortable in our clothes, why shouldn't we?

I also told them about a friend of mine who had told me to wear "subtler" clothes so as to not give men any reason to letch after me. My point is, why should we "adjust" ourselves, our clothes, our way of walking/ talking/ living just because a certain section of the society are frustrated enough to gape at us? Isn't it the supposed to be the other way around? Shouldn't they be asked to change their mentality, instead of us changing our habits? Yes, it does sound idealistic, but with time it just might be possible. The experienced BN volunteers (Mohnish and Manou) spoke about some of the strategies they had adopted earlier. Guys had been given wallet cards hat they distributed to people. Girls read out letters by victims standing on raised platforms. This helped them to gather attention and with this curiosity came awareness.

Four of us also read out four different letters, written by anonymous victims. Their experiences, though nothing extraordinary, reminded us exactly how much harassment we face on a day-to-day basis. The other people in the meeting place (Prithvi Cafe) were also listening though none of them came up and joined (as it is there wasn't any place left to sit..Nice turnout that we had)..

We spoke about the new drives BN will be arranging. The clothes collection drive was cheered by all of us. Three of the volunteers would look into the event in more detail (Somek is the event co-coordinator, Rizwan and Koel will look around for a place to exhibit the clothes as well as ask for necessary permissions). The probable places so far are Carter Road, Amphitheater where many such intellectual exhibits are held. Some of us may also visit colleges to attract the younger crowd.

The next event, to happen on January 2nd, is the idle woman campaign. However, many of the volunteers found some problems with this. The points they made were

#1) What is the point f doing nothing at all? How does it help the cause?

#2) Why should one do something which doesn't make her comfortable?

#3) Even if she does it that day (since she knows others are around), she would probably never repeat the action on her own.

What I felt was this exercise would again make us cross our private place, our areas of comfort. And if, maybe, we do it once and see that it is ok, we might repeat the incident again. Maybe doing nothing at all would help when people are in a bad mood, or even if they are in a good mood. It is after all about being comfortable and unapologetic for being who I am, how I am.

The whole meeting was a refreshing experience. I think none of us knew much about what to expect. And since it wasn't a huge NGO we could talk to each other personally. We could give our views, share our experiences. So in a way the size and informal atmosphere helped.

I think most of us came because we wanted to come. No one invited us or forced us to support this cause. We came cause we believed in it, cause we can relate to it. And thats why I'm sure all of us would like to be involved with the group for a long time. No matter how much we can contribute and in what way, we would feel better that we are doing our part (or some parts of our part at least).

I wish I had come. Having said that, I had a gala time at Colaba with my GF that Sunday. And I had an exam just before I went to Colaba so I was way too tired to traverse 30 kms (and then 35 back to my house) by the time it was 3 pm.
Seems like the biggest response for a BN event in Bombay (I have attended 3 events). I am marginally freer now than I was till some time ago, so will like to attend the next one.