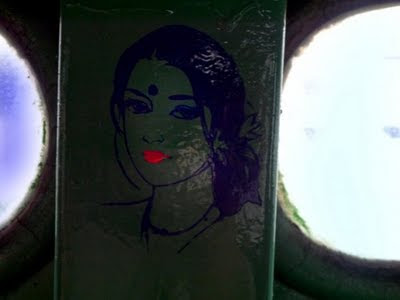 Remember the blog post about the Pink Ladies Special Bangalore Municipal Transport Corporation bus?
Now there's a pink taxi in Puebla, Mexico too.
And women only park in Iran
And women only hotel in Riyadh
And women only bus service in Mexico City.
And women only cars in Tokyo
And MODESTY BUSES in Jerusalem
And women only taxis in Dublin
And women only PINK coaches in Mexico City
this list is to be continued...
With this we ask again:
How do you experience public environments that are exclusively male or female.
Do you see this as a strategy that 'tackles' the issue?
What would you propose to make public commuting safe?
(answer in any colour you like)
Posted by J at 28.10.09 20 comments:

On being asked if Bangalore is safe or unsafe 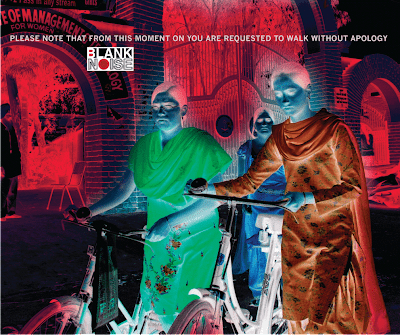 I was walking in my neighbourhood and I heard a hissing sound directed at me, followed by a “ baap re”- the usual provocation that we tend to ignore. It came from a security guard. I looked at him and continued to make eye contact until I left the location. He had been spotted, identified, confronted - but not in a manner that would make me feel safer if I walked there the next time.

Following the incident I made it a point to go over to the dhobi couple who iron clothes right opposite the security guard's building and have a friendly chat with them or to simply smile at them each time I passed by. This friendly exchange established me as a member of the locality. I find it comforting. It’s not always strategic; smiling in public can be fun.

Recently, I have been trying to speak in Kannada when I take autos. I have discussed auto unions, traffic jams and my Kannada speaking efforts with the drivers. In this process something has shifted between the potential aggressor and me. I feel less defensive.
Publish Post
The examples above should not be misinterpreted as urging that “women should do something to make themselves feel safer”. Women always have done things to feel safer. It is unfortunately fear-based and gets manifested in the following ways- carrying silly pepper sprays, blade, nail cutter, safety pins. Many women don’t even step out alone-always in groups, with a male member of the family, or chauffer driven. We fear, we don’t engage, we make the public space more alien; we make ourselves even more vulnerable.

The state recognises this vulnerability and seeks to counter it: for instance, acknowledging sexual violence in public transport, the Bangalore transport corporation has a pink bus- women’s only. It might work on an immediate level but does not really address the issue and serves to further segregate society.

Corporations have also been spurred to action. Following the murder and rape of a BPO employee- Pratibha Murthy (2005), HR officials announced special measures for dropping women home; women were made to feel safer by once again adopting methods that situate them as vulnerable rather than by empowering them.

A part of me is relieved when I hear about ‘reported’ assaults on women, so much in the news recently, here in Karnataka. It demonstrates that finally some women are speaking up, being heard, filing FIRs, and talking to media. The issue becomes ‘urgent’ and important instead of being ‘normal, expected and accepted’. We are no longer dismissing it as ’teasing’.
But alarmingly, the reports introduced a new kind of sexual violence that included women’s clothes being torn off, and brute violence. As a result, a climate of fear developed. For example, I was out for dinner the evening I heard about an assault in the neighbourhood. A gang of men had attacked the individual, punching and tearing off her clothes. Instead of taking an auto back at 10 30 pm, that night I took a taxi (but then, I have that luxury of choice). This was followed by more assaults all within a span of 2 weeks. All reported cases were attacks on a particular type of woman- English-speaking, jeans-wearing, seemingly independent and confident. As a result I had several well wishers cautioning me to dress conservatively- that is in traditional Indian clothes. I found myself hyper alert even during a casual evening walk. On some evenings I had to force myself to walk out in the evening; cell phone in hand. I was equipped. I felt nervous, brave… and exhausted.

In the past I have taken auto rickshaws at 6 am, 11 pm and 1 am. I have been in buses at all hours too. I did that with a sense of adventure and have reached my destination- safe. When the assaults were reported in the city, I found myself feeling like I was taking a risk by hiring public transport at 8 pm.

Being away from the city for a month and returning to no ‘fresh news’ about sexual harassment made me feel calmer. This not to say that there were none. Perhaps they just weren’t reported. Perhaps they happened to women who won’t know how to file an FIR or perhaps never see the point in talking about it. The reasons are infinite. Do we hear stories from middle aged women experiencing sexual violence? Women who live on the streets? Sex workers? These are just some of the provocative questions that recent violence has thrown up. Most importantly, I find myself asking: should we as women continue to deny ourselves the city because it has been declared unsafe? Can we look at current violence as a warning to address male attitudes?

The piece was first published in Elle Magazine. September 2009 issue.
Posted by Blank Noise at 1.10.09 5 comments: