Hostility, or My name is not Neha.

Connought Place is a funny place. Broad spaces outside shops all around two concentric rings. Crowded, but rarely overcrowded. And yet, and yet, not free of harassment, or eve-teasing.
That's why, on June 17th, we chose to do a night intervention there.

About seven of us met at M block. The plan was to do some stencilling (using spray paint, on the floor/road/pavement). It turned out to be a very busy night, for we got down to the business of spray cans and stencils, starting with the bus stops leading from M block to Regal cinema.

Responding to a last-minute idea, we'd also decided to do some chalking. With coloured chalk, we would either write testimonials on the walls, or simply 'IPC 509'. That is, remind people about the existence of section 509 of the Indian Penal Code.

In the afternoon, earlier, we had been chatting about IPC sections 509 and 354, the laws applicable to street sexual harassment and how there's so little discussion about the criminal aspect. In fact, even the volunteers tend to forget which sections of the law apply.

[Of the two, section 509 seemed the more obvious choice, because it is "broader in its purview. It includes words, gestures, sounds or exhibition of objects with a view to insult the modesty of a woman. It also includes the words “intrudes upon the privacy of a woman”. Section 354 requires "that there be assault or criminal force used intending to outrage the modesty of a woman or knowing that it will outrage her modesty." This deals with attempted rape or actual physical assault, but may not cover all aspects of sexual harassment.]

On shutters, wooden boards, corners. We chalked 'IPC 509' everywhere we could, in the hope that it will force people to think what it is and why it is there. Maybe even the cops would notice and remember its existence.

The stenciling this time was an interesting experience. We'd always been met with interest, and curiosity, until now. This time, we saw hostility. Our plan had been to tackle the space around movie theatres in CP. These are the busiest spots and on a weekend, we'd have the most people reading those testimonials.

Near Rivoli cinema, I'd barely finished stenciling one testimonial (which reads like 'Neha, age ..., time.... pm. Some men made rude comments and when I protested, the public laughed. My dupatta was snatched away'.]

One man stood right next to me and his foot shifted the stencil. Abhishek, one of our volunteers, asked him to step back a little, and he wouldn't. I had to step back and when the stencil was removed, this man aggressively started asking - 'What is this?'

We told him to read it himself. That's what it was there for.

He read it and started yelling. He told us, we were doing something wrong, that it was not done, that he would call the cops.

He asked me if I was Neha. He demanded to know who Neha was, and if she wasn't here, why were we writing those words down?

We sensed it was time to move, and tried to, but a crowd had gathered and by the time we managed to break away, a cop was on the scene. The man was still yelling.

By then, it was fairly apparent that the man was drunk, and the cop let us move on, without further ado. The evening proceeded smoothly there on. We did most of our stencilling just outside or inside subways, which were likely to have a lot of visibility. When paint and energy ran out, we split and went home.

However the hostility was interesting. In retrospect, I believe that we needed to witness it. That man, drunk as he may have been, was openly critical. What is even more interesting was that the crowd around us seemed hostile too, taking his cue from him.

He (and many others) responded with a testimonial of a girl being harassed with anger. Not empathy, not defensiveness, but anger. Also, he felt we were victimizing the girl - the mythical 'Neha'. He felt, we were insulting her. In his view, the insult does not lie in the act, but in the acknowledgment and public declaration of it happening.

This is something we've been struggling with for a while. Many women, when they do talk of sexual harassment, speak of it in a hushed way. Maybe they're not ashamed, but there is a lingering sense of shame - as if to be viewed as a sexual object/being is wrong.

I think it is worth thinking about: that we get harassed everyday, within this cultural context. In a context where being sexual - and how can you not be? - is 'wrong', the very fact that you're out there, dressed in anything ranging from a mini to a burqa, the fact that you are who you are - and you are inescapably a sexual being too - will be perceived as 'wrong'.
Posted by Annie Zaidi at 27.6.07 17 comments: 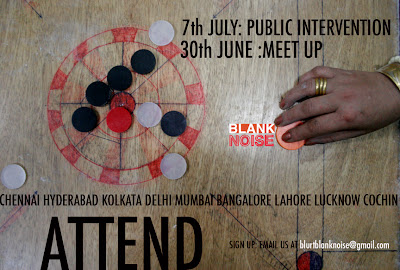 Thankyou for signing up to participate in the Blank Noise meet on June 30th + event on July 8th.

The venue and time for each city will be announced shortly.

Please email us at blurtblanknoise@gmail.com to confirm your attendance.

Names of people signing up from each city: 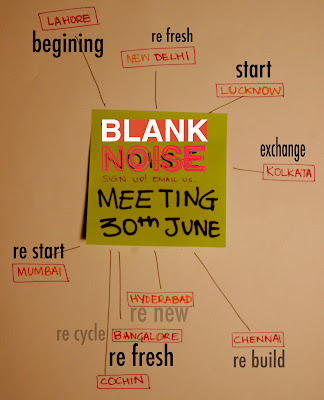 Because you emailed us and told us all about 'eve teasing' in your city. Because you believe it's time we did something!

This 30th of June,Saturday we open the project to you by inviting you to participate in the next Blank Noise meet.
This meeting attempts to bring about and document a discussion about street sexual harassment/ eve teasing in the cities. It also
initiates a process following which the Blank Noise communities will intervene in the streets of their cities.

The street intervention will take place 2 weeks from the 30th of June- July 7th. The intervention idea will develop from a 2 week process the new team follows.

The meeting will re introduce you to Blank Noise/ history/ future/ present. It will be moderated by volunteers from your cities.

The cities have been selected based on the emails we have received from people wanting to initiate Blank Noise there.

To participate email us at blurtblanknoise@gmail.com subject titled BLANK NOISE MEET- 'CITY NAME' Please email us asap so that we can add your name to the blog and confirm your participation. Do send us your contact details- phone no. too and a little note about yourself.

Young man leans out to ask for directions. The rest is a familiar, old story.

'Where is PVR Saket?'
'Do you live around here?'
'Would you like to come with me to PVR?'

I stop, turn around, take a good, long look at him. No words. I glance down at his number plate, and walk on ahead. 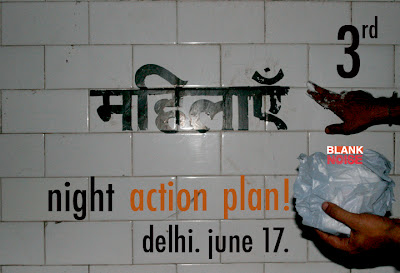 Be part of our 3rd Night Action Plan. The group meets at 7 pm at CP Barista, M block on Sunday
(tomorrow) June 17th.

The activity will conclude by 10 pm... come along and bring your friends/ family too!

The act requires you to be quick/ fast and spontaneous. It isn't acrobatic- just adventurous.

To confirm email us at blurtblanknoise@gmail.com.
Posted by J at 16.6.07 No comments: