" In Mourning and In Rage"

All through this week we are sharing works of artists we have been immensely inspired by. Thank you Suzanne Lacy, Leslie Labowitz , Bia Lowe, 1977 Los Angeles.

In Mourning and in Rage.
In memory of our sisters, we fight back

Talk To Me- Next Step

Dear Friends and Action Heroes,
Thank you for the amazing response to Talk To Me.
We've been getting emails and messages from you asking if you can do this in your city/ hood. Yes ofcourse you can. Just drop in an email at blurtblanknoise@gmail.com
We're trying to co ordinate Talk To Me across places on the same day.
In solidarity
Blank Noise Team
Posted by Blank Noise at 6.7.13 1 comment: 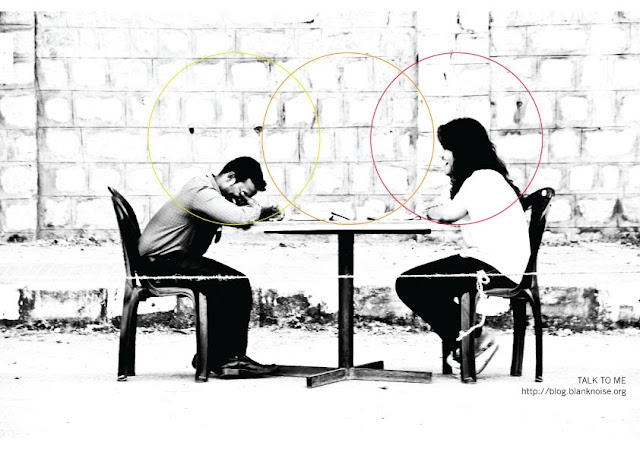 Talk To Me was designed to fight fear itself. To get rid of biases and prejudice.
To create space for a conversation, not threat. To make cities, neighbourhoods, streets friendly. To build empathy.

Five tables,  two chairs per table, chai and samosa.
The Yelahanka Action Hero invited a stranger to an hour long conversation about anything- fear, love, life. At the end of the conversation the Action Hero gifted a flower to the person across the table.

A conversation is a collaboration and requires openness, willingness, vulnerability.

Links:
The Atlantic by Sarah Goodyear
Posted by J at 1.7.13 5 comments: