" Lighthouses don’t go running all over an island looking for boats to save; they just stand there shining.” - Action Heroes . In Solidarity With Stanford Action Hero 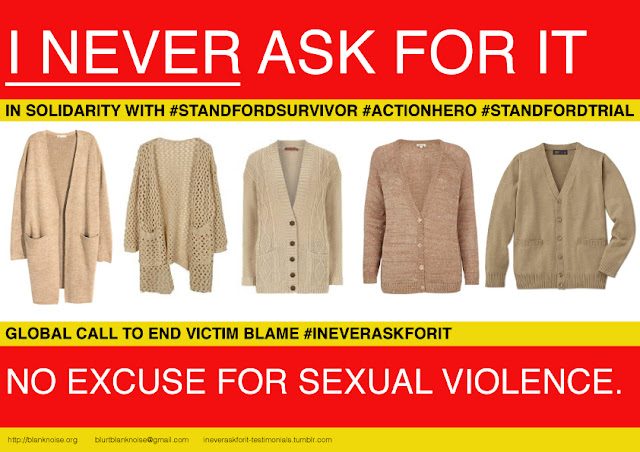 My sister teased me for wearing a beige cardigan to a frat party like a librarian. I called myself “big mama”, because I knew I’d be the oldest one there. I made silly faces, let my guard down, and drank liquor too fast not factoring in that my tolerance had significantly lowered since college.


Letter
One night in January 2015, two Stanford University graduate students biking across campus spotted a freshman thrusting his body on top of an unconscious, half-naked woman behind a dumpster. This March, a California jury found the former student, 20-year-old Brock Allen Turner, guilty of three counts of sexual assault. Turner faced a maximum of 14 years in state prison. On Thursday, he was sentenced to six months in county jail and probation. The judge said he feared a longer sentence would have a “severe impact” on Turner, a champion swimmer who once aspired to compete in the Olympics — a point repeatedly brought up during the trial.
On Thursday, Turner’s victim addressed him directly, detailing the severe impact his actions had on her — from the night she learned she had been assaulted by a stranger while unconscious, to the grueling trial during which Turner’s attorneys argued that she had eagerly consented.

This is a call for global action. Please connect if eradicating victim blame resonates with you. e: blurtblanknoise@gmail.com

Joe Biden Takes A Stand Against Victim Blame . His response to the letter. I join your global chorus of supporters, because we can never say enough to survivors: I believe you. It is not your fault. What you endured is never, never, never, NEVER a woman’s fault,"

Email ThisBlogThis!Share to TwitterShare to FacebookShare to Pinterest
Labels: campus, i never ask for it, reporting to remember, victim blame