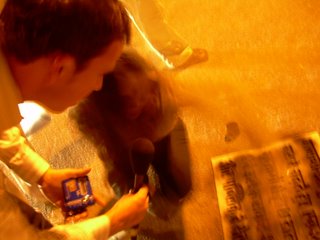 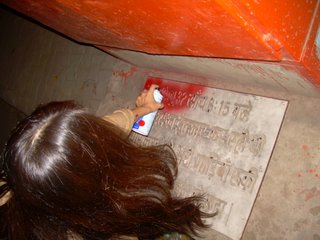 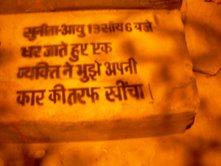 1] Sparse attendance was, er, an under-statement. However, thinking back to the evening, I realise that sparse attendance was not the problem, given our agenda - of putting up posters and stencilling. Vasant Vihar the Priya complex esp, is a place where most women do feel safe. There isn't much groping etc. But even within safe areas, there are pockets of discomfort. For instance, there are benches and sort-of squares/round platforms (?) where young people sit. Girls will sit there in groups or with male friends but never alone.

My thought - do we want to tackle this sort of discomfort, as opposed to active eve-teasing/harassment, at this stage?

2] Once outside the complex, the roads were completely deserted, from a feminine perspective. We did not attract that much unwanted attention because we were three women accompanied by four men. But there was no other woman out on the roads at that time, though this is a residential area, more or less, and it was only 10 pm. We did talk to people who came up to ask what we were upto. (Since there was a BBC radio guy there, with a mike in his hand, that led to a different kind of conversation.

Abigail adds: having someone from BBC with a microphone led to a somewhat different interaction--but it was interesting as during these actions we often do not engage with the public. A few men on the street were interviewed regarding their views on eve-teasing, whether they thought the way we were approaching the problem was correct, etc.

One of the men said that in his 23 years he has never eve-teased a girl. When asked how he would react the next time a woman was teased in front of him, if he would speak up, he said he could--but what can one person say or do? He can speak up but it won't change the fact that everyone else is still taking part in it or still silently watching. He also mentioned cases of violence against those who spoke out against harassment when it happened with the women in their family.

Another man was of the opinion that men will not eve-tease in a public place, that the presence of the public will stop them. But "agar by chance" it happens all the woman has to do is say something and they will come to her aid.

The comments made I thought were generally positive, even if they tended to be of the nature, "I've heard it happens" or "occasionally it happens..."). 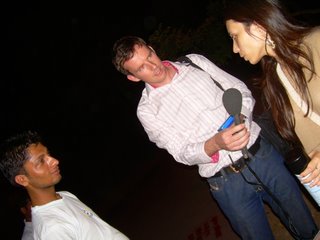 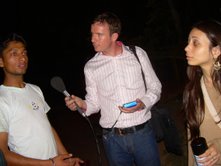 Back to Annie:
3] Good moment - a car full of drunk young men slowed down near us while we were stencilling near a bus-stop. One young chap got down to talk to me. I read out some of the testimonials we were painting on the roads. He asked to be allowed to spray-paint (and did a good job). His friends in the car were acting dismissing and tittering. He turned around and told them "It happened to my sister too." That, rather effectively, shut them up. 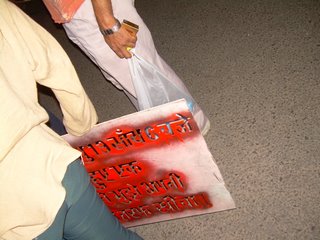 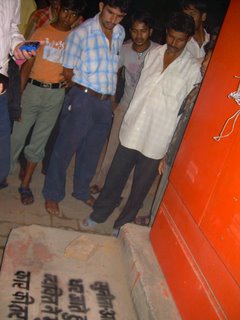 4] Unpleasant moment - one of the stops where we put posters turned out to be a sort of hangout place for another bunch of teenaged boys - this is where they hid their cache of booze, we think. They were already somewhat drunk, perhaps, or perhaps were annoyed with us for being in their way... they passed some comments, after reading the poster. Like, "Oh, so you are not allowed to touch, to look, to whistle... make sure you don't whistle, yaar, but what you should do is go up to the girl, tell her to make friendship; that's what you should do." This was not, strictly speaking,a wrong thing to say, but was said with a smirk and with deliberate sarcasm.
How is one to deal with responses like that? Should we deal with them at all? 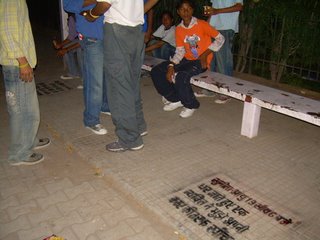 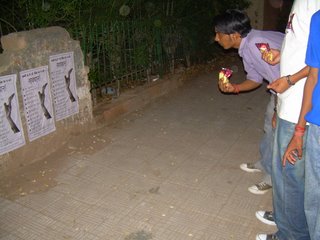 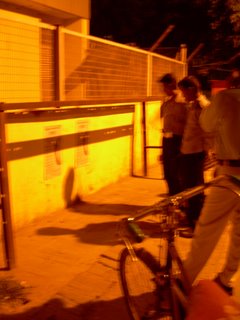 5] I think we need to work out different strategies for different areas of action. We need to think of doing more than just putting up posters or stencils or testimonials at night. Maybe build up an idea (and material) bank. Anybody who has new ideas could mail Jasmeen and let's see if something workable works out. 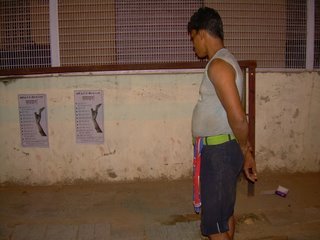 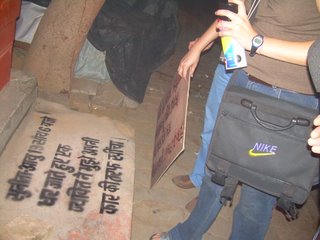 thanks for putting it together :)

i donno who all r doing all this.. coz i'm too bad at reading things.. but whatever it is.. it's damn gud guys..
RDB online :D
keep up the work.

i donno who all r doing all this.. coz i'm too bad at reading things.. but whatever it is.. it's damn gud guys..
RDB online :D
keep up the work.

Hi, I found your blog through the Feministing blog/website. I just wanted to tell you that I think what you are doing is amazing and so brave. I have never been to India, but I work at a very large Indian company in America. I like working here and I have learned a lot about the culture and the people.
I used to live in New York City and would sometimes get "cat-called" at night there. It really didn't matter what you were wearing either. I hated it because it's really scary. You don't know if the guy who is harrasing you is going to take the next step and attack you. It's awful.
I think it's amazing what you are doing and I hope that you get a lot more news coverage and that people start to consider what their actions mean. They probably wouldn't want some guy harrasing their sister or mother, so why is it it ok to harass a woman they don't know?

I hope you don't mind if I link to your blog. I'd love to help get the word out.

is it everyone or just me hearing the audio in a really strange way?? or do you guys really sound like this :)

"It happened to my sister too"

That is such a powerful statement to me. He got it. He truly understood. Eve-teasing isn't just something that affects women; It's hurtful for the men who have loved ones that are female. Men should care about what women are going through. Thankfully, at least one man was courageous enough to show some solidarity that night. Maybe it will make his friends think twice before eve-teasing a woman. At least they'll know not to do it in front of him and maybe that will result in a few women being saved from harassment when he's around.

Living in vasant vihar for ages,i am still not allowed to visit priya's alone.A market most popular remains the hub for eve teasing!Be it for a munch or a stall,I have guards or my father to acompany me!!

I too can recall couple of incidents that leads to frustration and helplessness...and its endless!
Until the people around aren't made aware of their rights and taught the lesson of being humane nothing wud get sorted!
Good start and good luck:!