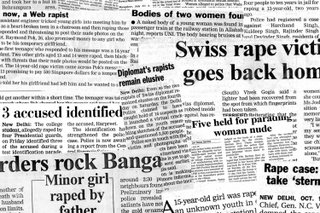 Some of our readers have asked us why we have not written about Meher Bhargava. Or Jessica Lal. Or the fact that Sunil More - in a rare case of speedy, faith-affirming justice - has been given 12 years imprisonment for the infamous Marine Drive rape. Or several others, not so famous, beyond the headlines, outside of the soundbytes, who have been harmed by eve-teasing or any other form of violation. Or those who, in cases so infrequent they seem almost bizarre, have been arrested and punished for these crimes.

But mostly, we've been asked why we have not written about Meher Bhargava, the feisty 50-year-old who died after being shot while protesting her daughter-in-law being eve-teased.

Our silence on any of these issues has not been one of indifference. Or apathy. But Blank Noise believes - in all its evolving, collective wisdom - that merely to react to news with an impassioned, outraged blog post is not enough. Meher Bhargava - whose instance can only make us shudder as much with anger as with disbelief - cannot become one headline, one story, one post that attracts thousands of comments. She cannot be our poster-girl. Absolutely not.

Our silence, then, has only been one of introspection and deliberation. What do we do in these times? When hostile witnesses stall justice just as cooperative ones speed it along? When women like Priyadarshini Mattoo are remembered only when a Jessica Lal is brought back into collective public memory? When women have acid thrown on them for refusing a man's ardent overtures? Or for speaking up? When schoolgirls, adolescents, adults - every woman on every street in every city - is always in danger of violation?

Sounds overdone? Sounds exaggerated? Read the newspapers of the past month. Watch news channels hour after tiresome hour every day. I've just summed it up into one paragraph. But it still goes on.

Therefore, Blank Noise Project has decided to meet. In big cities and small cities. Whereever people can gather together to formulate action. To create performances of protest. To look up in anger and then do something about it.

Good, I'm glad. While you're right in that there needs to be less knee-jerk reaction and more introspection and long-term thinking/action, there is also a case for using the context of events to make your point.

I did make the point in one of my editorials that Blank Noise should have used Meher's murder to rally their cause. I stand by that because most people think short-term and you need to strike while the iron is hot providing you have sustainable long term plans.

So by all means, meet and discuss. But formulate a strategy and then use every opportunity to push forward the agenda.

hi sunny. thanks for the comment. could we please get a link to your editorial?

Priyadarshini means lovely. And so she was. A lovely girl with massive zeal for life. Law and Music were among her passions. She was the apple of her parents' eyes, as is any other daughter to her parents. She was brutally raped and murdered by the son of an IGP. This has been the only case in the history of India where the judge himself clearly wrote that he knew the accused was the culprit and CBI had not acted fairly. It was a shame for the country's judicial system. A shame for New Delhi To add salt to the injury, the culprit - Santosh Kumar Singh - is a lawyer in Delhi's Tees Hazari Court. How many more years are we going to hide our heads in the sand? How many more years are we going to assume that our daughters and sisters are safe?

This in a country where women are traditionally given more respect than anywhere else in the world. How ironical?

Justice J.P. Thareja's words:
''Though I know he is the man who committed the crime, I acquit him, giving him the benefit of the doubt."

"The CBI in the matter of DNA evidence has not acted fairly. It tampered with the evidence of clothes of the deceased and also the blood sample of the accused.It even fabricated the documentary evidence and also the Malkhana Register of the CBI as is clear from the discrepancies."

Priyadarshini's parents' words to us:

"Your email has infused hope and strength in us and we know that after we are gone, people like you will carry this mission forward and you will bring the guilty to book. Our prayers and blessings are with you."

10 years .. Justice denied. She is waiting with her lovely smile as are her parents' wet eyes and a broken heart. 23rd January, 1996 she was murdered.

Sunday, 23rd July is her birthday. A war cry for justice in the heart of Delhi, a protest that shakes the pillars of the Govt. and one demand - Let justice be delivered immediately.

Are you ready to give her justice?

Visit our Blog at : www.justice4priyadarshini.blogspot.com

Thousand of people have signed the Petition for retrial in Priyadarshini Mattoo Case, visit the link: www.petitiononline.com/mattoo/petition.html