Students, now 'Action Heroes' at Srishti Institute Of Art Design and Technology worked with Blank Noise through the Interim Semester in 2014. Action Heroes walked the Bangalore Pride, 2014 asking the question  " What do you wish for?  What do you dream of ? What do you ask for ?"

" Everyone is entitled to live a life of dignity. Humiliation is what we're fighting against.
Our demand before the parliament is that the law needs to be repealed. We need to ensure that the Union Of India moves to repeal this particular law. ..and when this law goes... a social attitude is transformed, and that is our objective. " - Arvind Narrain.

Siddarth Narain examines blame through the I Never Ask For It text series.

" For those who are lucky to have supportive family, liberal peer groups, exposure to support
groups, or LGBT communities, the feeling of guilt is gradually replaced with that
of pride, pride in being different.


Coming to terms with one’s sexuality and the norms and practices of one’s community is a life long project. Part of this process is to recognize and deal with the phenomenon of victim-blame. I.e. the impulse to blame oneself, or someone from one’s own “community” for being at the receiving end, violence or stigma. If we are not careful, this then becomes an easy narrative, hiding more structural
problems of discrimination. "

Send a garment you wore when you experienced any form of sexual or gender based violence/ discrimination. Be a force to end victim blame. I Never Ask For It. 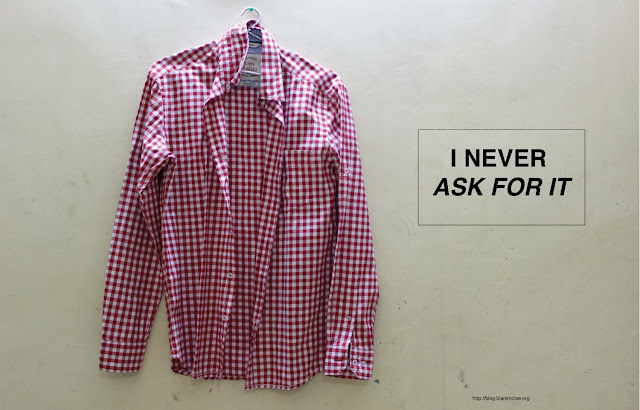 Action Hero AbhishekNew Delhi, India
Once, while walking out of the college, a group of men followed me till the Metro station. They all were whispering but their giggles let out insulting gestures and they seemed 'amused' by me. One of them followed me till the inside and then I knew, it was enough.

I turned back to the perpetrator, something that we are ingrained to dodge and asked what his 'problem' was. I didn't seem very entertaining to him after that.

"I like dressing in colours, in different styles that could are often dubbed as 'weird for a boy' or are seen as gender subversive but even when I do dress in the simplest gender conforming clothes, something as simple as a red and white checked shirt, things don't always change. I still often find myself in a web of stares and unsaid questions on the streets but I pledge not to loose my colours. They are here to stay and so am I.

Be a force to end victim blame. I Never Ask For It.
Share your testimonial here

Email ThisBlogThis!Share to TwitterShare to FacebookShare to Pinterest
Labels: 377, i never ask for it, LGBTQHI

I was very pleased to find this site.I wanted to thank you for this great read!! I definitely enjoying every little bit of it and I have you bookmarked to check out