Plot: As part of International Anti Street Harassment Week, Breakthrough and were in the midst of an all day twitter event examining the myth of security via gender and class based segregation. We're for inclusion. Each Action Hero selected a bus or metro route and chose to sit in the general compartment not the ladies only section. They tweeted their experience live. 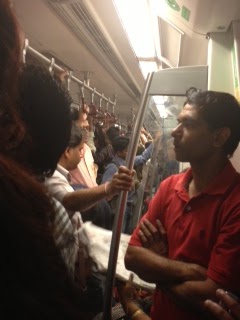 *
Shivangini Tandon: @shivtan
Metro. Green Park- Nizammuddin
The Delhi Metro is a relatively new public transport system in New Delhi.  My experience during the tweetathon was positive. While many men did stare I did not feel threatened at any point. When I interviewed a woman who travels in the metro often she told me she chooses to use the women's compartment out of convenience because it allows for place to stand or sit, not because it makes her feel safer. At some point, during rush hour, a man even apologised to me for not being able to give me enough space to stand. I also believe that it is helping create a new social etiquette for behaviour in public spaces. New spaces change behaviour. The sanitary, orderly environment that the metro creates is unique to the normal chaos that a large Indian city typically offers. 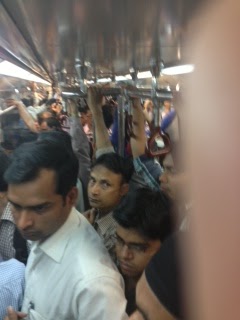 It is of course easier to compartmentalize our daily lives into gendered sections- this is for women, that is for men. Be it in domestic spaces or even public spaces. The public transport system, for example, is modeled on this kind of segregation and one often considers this to be the best way of avoiding a conflict between the two sexes. Yes, that does make life simpler sometimes- i stick to my pink compartment, you stick to the rest of the train,and life goes on. But what does it really say of ourselves as a society if we cant even co-exist within the same space without a conflict? Why do we necessarily need to alienate and why cant we make an effort to co-exist through mutual respect? Why should i stick to one compartment or sit myself in one of the eight seats in a bus that seats thirty people? It was with these questions in my head that I decided to sit in the "general" seating area in a DTC bus. What was most amusing was the appropriation of a "general" space into being a "male" space. The general seats are considered to be "aadmiyon ka seat" and the decision of a woman to not stick to her "allotted space" is essentially seen to be an aberration. It didn't get violent or abusive but the disdain and disapproval was made amply evident by my co-passengers.It isnt a comfortable position to be in when one pushes the envelope and steps out of one's allotted space but how long can one really lay out one's life in terms of eight seats, one compartment and a strip of platform marked out in pink?

We are an over crowded nation, we have 3 times the population of united states and with 1/3rd of the land mass as US. Our government is not so efficient to provide comfortable mass transit system, heck no government in the world has been able to do that. Its time that we evolve as a community and learn to coexist in a confined space without invading others privacy, its possible. We just need to learn how to do it.
I was in Delhi last year and traveled to Gurgaon by metro, it was jamm packed, more like an overloaded cattle train. A lady and her - 2 or 3 year old kid just managed to get in. Unfortunately I was pinned next to the lady. The sheer discomfort on her face and embarrassment that she was feeling made that 5 minutes train ride the worst of my life. I tried to make space, but i ain't so strong that I can push 100s of people behind. I feel she should not have been embarrassed, she is a human being and so am I. Its the same with many men when they see a lady siting on "aadmiyon ka seat" he is probably afraid to sit next to her. At least as a start , in mass transit systems we should start seeing each other as a fellow human being and not the opposite sex.