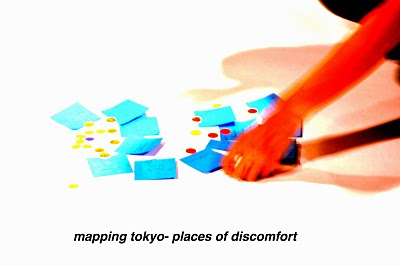 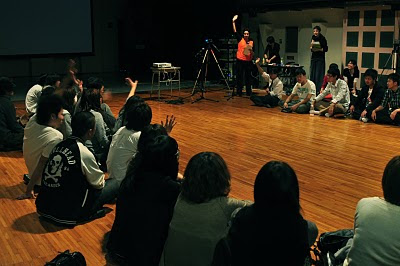 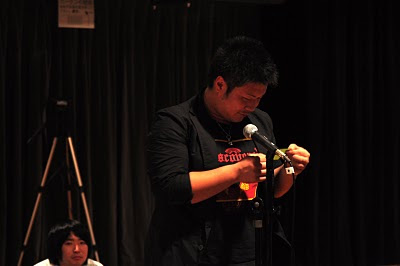 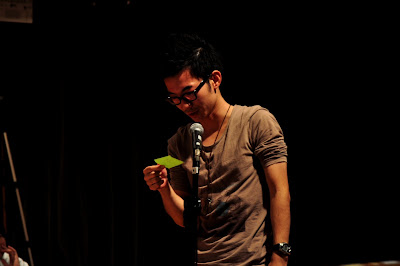 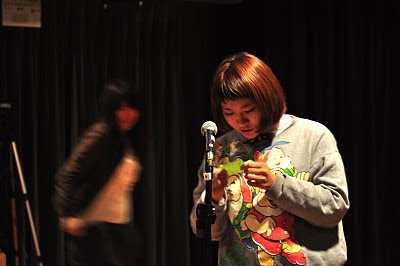 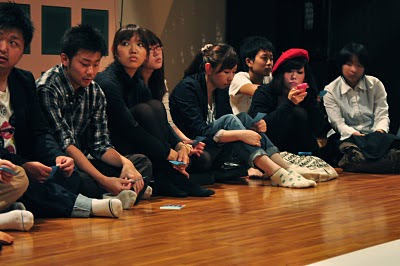 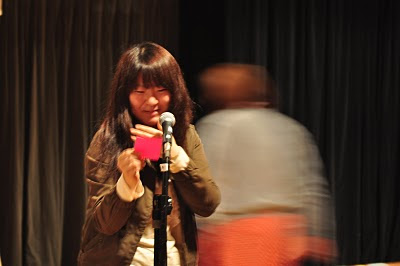 photos: Prilla Tania
translation from Japanese to English: Emma Ota
event organized via dislocate mediactions
No of participants: 30+
Age of participants: 18-20 years
There were both male and female participants.
Brief outline of the workshop:
Workshop participants mapped places in Tokyo they like to visit.
They also mapped places in Tokyo they didn't like to visit, or felt uncomfortable in, also mentioned what caused discomfort in those places.
We briefly introduced BN and also shared images of 'women only' transport from across the planet. Is women only transport a solution? An easy strategy? (more thoughts on that in the next blog post)
There seems to be no fixed definition of street sexual harassment in Japan. In Japan 'secu hara' is seen as different from 'chikan'. Chikan is loosely identified as groping, touching, rubbing and flashing.
The students were asked to think of as many words and associations with chikan and sexual harassment. Here's what they had to say :

It is the lowest part of people

Being hit on by a stranger

When i was a high school student one morning I was chased by a flasher. Chikan in the train. Exposing sexual desire in public is sexual harassment.

I was walking one night and followed by someone, kept grabbing my skirt and touched my rear.

Disturbing action towards the opposite sex.

I was on my bike and riding through the town and stop at traffic signal then someone touched my thighs.

I had experience of being a victim of chikan. I think this type of person is disgusting.

Something judged by the girl.

I was accused on the train.

The unwanted touching of the body.

It has a strong image of being something perpartrated by men against women, but the truth is That women can also be perpetrators.

The line of sexual harrassment is different for each person. so it is not a problem.

Being asked where you live.

Being made to feel bad by someone.

To cause suffering. doesnt matter which gender you are.

To cause pain to someone, even just talking and overstepping a certain distance.

Causing pain to another person, a despicable act.

I dont have any expereince so i dont know.

I am not interested./ i have nothing to write.

Sexual harrassment is bad but i dont think excessive reaction by the authorities is the answer.

I dont want to write about it.

I dont really have that expereince so i dont know.

I have no idea. sorry.

* we will be sorting the response based on male/ female as soon as the translation is ready.
5 students both male and female analyzed the response with the following statements:

I thought that women generally experience sexual harassment and this activity made it clear to me.

Well personally and amongst my friends I have never been in contact with such a thing, but now I realize that people do suffer from such acts.

Well we just heard about a park especially for women, and obviously at night/in the evening women don't feel safe to go outside and so i thought it could be a good idea to have women only parks, but of course rather than this situation it is much better to attain a safer society without any gender bias. We still live in a society with a very unequal balance between men and women. To have women only carriages on trains and a lot of people really appreciate this service but it does not solve or address the problem. what we really need to do is to attain complete equality between the sexes. we should all work together for a safer society.

Well in our discussions we have really been making a distinction between men and women and firstly i think this kind of thinking is problematic. it is not only women who experience sexual harassment but also men.