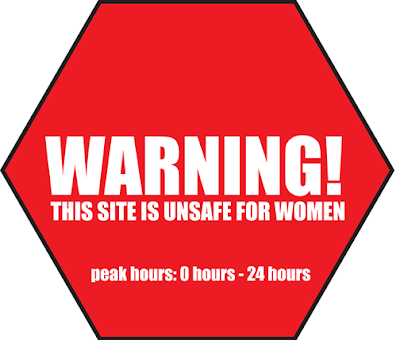 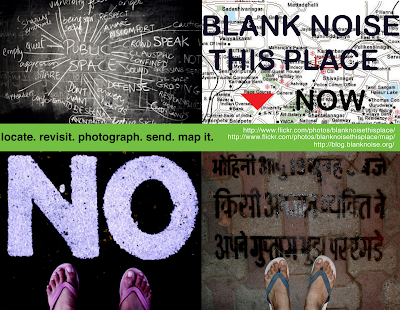 We invite you to engage with our new project- Blank Noise This Place.

The site is a witness and your photograph is your testimonial.

Blank Noise This Place will archive photographs that you send of public places and locations you have been sexually assaulted in any degree that you consider sexual harassment/ violence.

To participate we ask you to revisit your site of violation with a camera. ( any camera will do- quality is not important as much as your act of revisiting and documenting). Please email it to us at blurtblanknoise@gmail.com with an account of -
what occurred- what time-which country.city it took place in
Please add in details such as your age and name

Your contributions will be put on a world wide map that will specifically identify each participant's site of sexual assault. www.flickr.com/photos/blanknoisethisplace/map/

If you do not wish to have your name up- do tell us.

You are further requested to get others involved! Do introduce this idea to friends peers and all the women you know! In true spirit, cameras could be borrowed, shared, collective trips could be made to each person's site of violation. Organisations and groups are also invited to participate. We hope to hear from you. Let's Blank Noise This Place!
Posted by J at 24.3.08

Interesting idea!
But why?

Maam,
We are facing repeated unsolicited vulgar msging and calls (literally satlking as he seems to be watching us)
Could blank Noise project help us retrieve the identity of the person who is behind this if we pass on the phone number?

How about taking a short trip to your nearest police station?

mmm.... i am iffy abt the use of the word únsafe'.... coz a ot of places are not Unsafe, but make women uncomfortable nevertheless, like a chai shop- a very male space, not necessarily unsafe, would BNP not want to map those also?

there was a bit of debate between mapping 'feared' spaces and mapping locations where people have been violated. we went with the more testimonial nature of the latter


however it would be worth keeping a separate map of places people fear.

I am against eve teasing but I am more against women who perennailly think they are being molested etc..

Hit upon ur blog accidentally and am surprised by the amount of bull crap people post.. Yes a couple of instances would fall under eve teasing but majority of them qualify under "Thats another guy I can label an eve teaser and put up on my blog"

Get a life.. N use the time tht u spend looking for "click victims" to sit n think of a more concrete action plan to tackle the issue if u beleieve in it so much..

Ha haa..easy to be judgemental, especially when you are a spectator. Hard to get involved and do something.

hi Jas, see i wud like to say something which wil leave u angry..but see, instead of trying to know wat victims of eve teasing were subjected to..try to counter it...see y it happens?? as a guy, saying this mayb easy, but living as a guy, i know wat wil invite eve-teasing and wat wudnt...

today, eve-teasing is a result of sumthing like - u asked for it, now ve it...

y blame all d manhood 4 this issue in which even women too r an important ingrediant...??

apeing western culture, has left us charred in our own country...Root Cause accordign to me....sorry if i am harsh..

I am curious to know your thoughts. Can you please answer my questions:

1. In what way can a woman ask for eve-teasing? What sort of behavior on her part can be considered as "asking"? In other words, what will invite eve-teasing?

2. How should a woman behave if she does not want to "ask" for eve-teasing? More generally, what is it that doesn't invite eve-teasing?

Please try to be more specific in your replies. For example, if you merely say, "aping western culture", then that is a very general term. Thanks and Regards.

An illuminating article about Eve-teasing in New York -

Classic, he says "aping western culture" and there he is in his blogger foto standing in front of a Mickey Dee's (MacDonald's) sign!