BLANK NOISE KOLKATA. MARCH 8. I NEVER ASK FOR IT 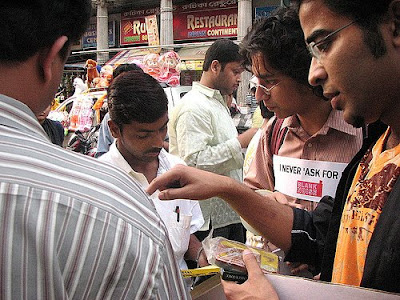 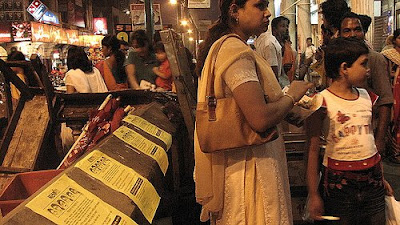 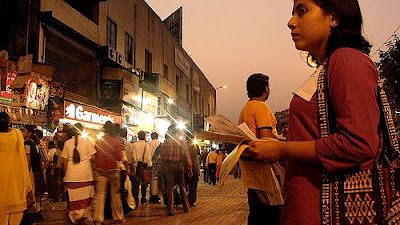 Blank Noise Kolkata Action Hero Dia reports:
i could not exactly wear the clothes that i was sexually harrassed in.... i did not really remember because i hardly have worn something in which i havent been eve-teased.
the march 8 intervention is a day i will remember for long.
i have been for walks for various causes but that day was different.it was a day i felt free.
i had been to the busy corners of new market endless times before, always cautious of not bumping into people,avoiding deliberate pushes and wishing of not being satred at.....
but 8th march was my day....
as i stood there giving out testimonials and pamplets,as i walked with so many like me,blowing the whistle i almost felt i was the queen of the street.it was my street and i could be what i wanted....
street sexual harrassment is something that has always been there...and maybe i thought nothing would ever change it.i even had a discussion with Saptarshi about how difficult it is to change the mindset more than anything else....
but that day gave me a new reason to think again.
Dana had put in so much effort and ofcourse eeverybody else....i really felt that we could all make a difference.
i held my head high that evening....i stared back at people who stared at me...... it felt so very liberating. As i walked back home that day i wanted to go back and live those moments again.
-

Blank Noise Action Hero Kolkata Shuktara Lal reports:
This was my first Blank Noise intervention. I went to New Market without really having any expectations from the intervention. Perhaps the only thing I went with was a sense of curiosity. Curiosity about whether I would actually feel empowered at the end of the intervention.

It didn't take me much time to figure out what clothes I should wear: I'm pretty sure I have been harassed when wearing each and every piece of clothing I possess. So anything I own could have fit the "wear something you were wearing when you faced harassment" parameter. However, I did think of wearing something I'd worn when I'd faced a scarier version of harassment (as I said, harassment for me is a daily ritual; what varies is the degree) quite recently. I changed my mind because it was low cut and torso-hugging. I decided to wear something very mundane to prove that it didn't really matter what I wore. I'd still be harassed.

The nice thing about Blank Noise meetings (I can add interventions here, now, since I've been to one) is that you form a completely unspoken, but, nonetheless, powerful bond with the other women/girls who come to the meeting/intervention as well. It doesn't matter if they are absolute strangers or distant acquaintances. During a Blank Noise meeting, I experience a much higher feeling of self-strength (I can't seem to think of a better way to put it) in just being with other women who have made time to come to the meeting because they have faced street sexual abuse. It's a statement I think all of us women make when we go to a Blank Noise meeting, and that statement continues into the intervention. Just the very basic act of acknowledging that street sexual abuse exists and deciding to protest it and simultaneously being with other women who are doing the same thing is incredibly self-strengthening.


Blank Noise Kolkata Action Hero Purba Sarkar reports:
The last bit with the whistles was a lot of fun, and I not only speak for myself, but for the entire gang. So much that we had a go at it again a few minutes after 6.30, when we all gathered together. It sure got people's attention. While standing there, by one of the most busiest streets, just standing, I was trying to read people, and guess if they were going to walk past, make eye contact, try to bump, or steer away. The ladies were busy walking to the shop of their choice. Not many noticed me standing there, those who did, did not have enough time to give it much thought. Some men looked curiously at me, at the sticker on my chest. I gave the letter to them. Some came up and asked for the letter I had in my hands. They got one too. I like to think of them reading it, and getting it for what it was.
The polls got varied reactions but I wasn't close to any of them to be able to give first hand account of it. They did look very filled out when we were taking them down. The soft toy seller J and I spoke to didn't turn up Saturday. On asking around, I was told he had gone to get goods. Whether he was going to turn up that day was uncertain. He did not. The Chat wala was not as friendly as when we had earlier spoken to him. This may have had something to do with it being a Saturday evening and the busiest hours of his week. We left him to his work and put up one of the polls near his stall. One poll was put up on Dana's car, which after 20 minutes of driving around she could finally park right on the main street. The other was on a lemonade stall. The stamp pads were stuck with tape next to the polls. We left pamphlets near the polls and with the Tea Stall guy. There were none left when we were checking back. Some of the members had people filling the strip and handing it back to them.
Interventions like this make me very glad because I am doing something which makes me feel stronger and more confident to deal with street harassment and it so helps knowing there are twenty people backing me up.
Posted by J at 11.3.08

Er, what was it exactly that Blank Noise Kolkata Action Hero Sunayana had to say?

she said above- sorry about that. ..thats why.