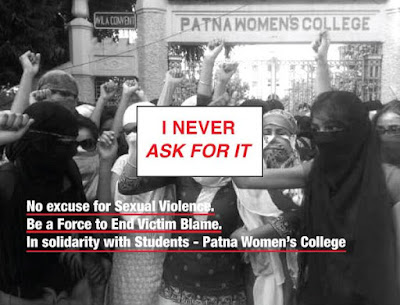 She reports an incident of sexual violence against her professor.
It is followed by her research being stolen, she is denied access to the lab, intimidated, forcefully confined, and later even questioned as to why she ‘delay’ filing a complaint. The principal, Thampu, asks her to withdraw the complaint, to not ‘harm the reputation of the college’.

“Nothing a survivor does makes rape or any sexual assault OK,” she wrote. “By investigating victims for violations of the honor code, BYU is revictimizing those who come forward and blaming them for what happened.” -
http://nytlive.nytimes.com/womenintheworld/2016/04/21/student-at-brigham-young-university-might-be-punished-by-school-after-being-raped/

iii)
Campus: Patna Women’s College
Patna, India
2015
"Bachelor of Mass Communication (BMC) Department students were locked up inside college classrooms and they were not allowed to join the protests and to say anything against the college administration."

Do you and your peers identify the need to end rape culture and victim blame on campus?