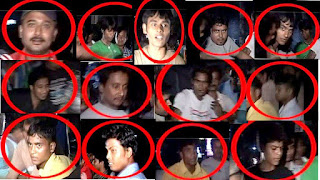 Are these mobs of 'men'? This is not manhood.

Am in 2 minds about posting the video. The footage reveals the following


1.  The camera wasn't hidden. It even had a light attached to it. They didn't care about being 'caught' on camera; on the contrary they seem to have their performance on display.
2. The mob identifies the faces of the perpetrators.  4 have been arrested so far.
3. The video is an assault .  It could also be argued as the dilemma of 'documentary' footage. While we would not have experienced this shock without the footage , we can't help but question why the camera person didn't do more- if we could assume he/she was the only person with reason in this mob. Who shot this footage? Can anyone connect us to the camera person so that we interview this person?
4. Mobs and intervention. What would stop this behaviour at that time? Police? You? Me?
A counter 'peace mob'? And or  constant working on the simple attitude that street harassment is every body's business. It's not 'just a women issue'. ( more on 'whose issue' in the next post)
We will examine case studies relating to mob behaviour and immediate successful intervention. To begin that we will document mob led attacks. If you know of someone working in this area - please do connect us right away.

We don't recommend you watching the footage unless you promise to be disgusted , outraged, sickened ,shocked, saddened and angered and importantly urged towards changing the scene.
But ,what if you were there?

Goodness! That is a new low! And so deliberate too!

"A reporter from a local news channel, Dipya Bordoloi, said he tried to help the victim when he saw the commotion. "It was almost like a gang-rape," he said, adding that when it was clear that the mob could not be overcome, he began filming the incident for evidence against the attackers. He told NDTV he was disgusted that he couldn't do more to help her. The news editor of the TV channel, Newslive, told NDTV that the police has asked for the footage but has not questioned the reporter for any details about the men involved in the attack. He said the sincerity of the police appears questionable."
http://www.ndtv.com/article/cheat-sheet/guwahati-puts-up-hoarding-of-men-who-molested-girl-10-developments-242917

the interview of the reporter

News Live initially showed the episode as "Drunken girl on the streets of Guwahati". ("Rajphothot maatal juboti"). For two days until main-stream media picked up the story, there were chat shows on whether girls were upholding "shalinota" in Guwahati, and whether they weren't responsible for what happened by dressing in shorts and going to pubs. Now there are allegations that the journalist himself was responsible for egging the mob on because he had made a lewd pass at the girls, who abused him verbally. And in the meantime, the news channel has changed its tune to "we taped it for her own good." Bollocks.

Shows the mindset of new, young India. We never treated our women in dignified fashion and this episode clearly shows that we never will. Don't just look at the incident or the video or the video grapher. See the kind of response that India is showing. The way we respond to such situations disgusts me more than the actions of a few people.

but seriously. what if i was there. what can i do to prevent something like this in my city? what do i do when lewd gestures/catcalls/very offensive comments are passed?

I really cannot figure out what im supposed to do. help?