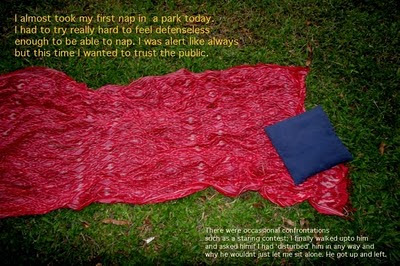 By Maesy Angelina
first posted here and here
The activism of digital natives is often considered different from previous generations because of the methods and tools they use. However, reflecting on my conversations with The Blank Noise Project and my experience in the ‘Digital Natives Talking Back’ workshop in Taipei, the difference goes beyond the method and can be spotted at the analytical level – how young people today are thinking about their activism.

Last August, I had the opportunity to participate in the three-day grueling yet highly rewarding ‘Digital Natives Talking Back’ workshop in Taipei. On the very first day, Seema Nair, one of the facilitators and a good friend, asked us to reflect about what ‘talking back’ means in the context of activism. At first glance, activism is almost always interpreted as a confrontational resistance towards an identifiable opponent over a certain issue - a group of activists protesting against a discriminatory legislation passed by a government, for example. Although this is definitely the most popular form, is this the only way activism could be done?

While reflecting on Seema’s question, I thought of my conversations with people in the Blank Noise Project and how they seem to defy this popular imagination through their efforts to address street sexual harassment. From the way it articulates its issue (I have shared it before in here), Blank Noise challenges the idea of an opponent in activism by refusing to identify an entity as the “enemy” or the one responsible for the issue, given the grey areas of street sexual harassment. The opponent is intangible instead: the mindset shared by all members of society that enables the violation to continue.

Consequently, Blank Noise ‘talks back’ differently. While it is common for many movements to set an intangible vision as its goal (for instance: a society where women is treated as equals with men), they also have a tangible intermediary targets to move towards the broader vision (e.g. a new legislation or service provision for women affected by domestic violence). Blank Noise sticks with the intangible. The goal is to form a collective where eve teasing is everybody’s shared concern, spreading awareness that street sexual harassment is happening every day and it is unacceptable because it is a form of violence against women. Pooja Gupta, a 19 year old art student who is one of the initiators of the ‘I Never Ask for It’ Facebook campaign, underlined this intangible goal by saying that “The goal really is to spread awareness. It is not about pushing any specific agenda or telling people what to do.”

Because of this goal, I initially thought that there is a clear demarcation between people within the Blank Noise and the ‘public’ whose awareness they would like to raise – that there is a clear “us” (the Blank Noise activists) and “them” (the target group). However, I was corrected by Jasmeen Patheja, the founder of Blank Noise, when we chatted one day. “I haven’t ever put it that way. Since the beginning, the collective is meant to be inclusive and there is no specific target group. The public is invited to participate and there is no audience, everyone is a participant and co-creator.”

The strategy for this is to open up a public dialogue. When Blank Noise first started in 2003, it started with the street as the public space and uses art as its method of intervention. It takes many forms: performative art, clothes exhibition, street polls, and many others. Although today Blank Noise is much more known for its engagement with the virtual public through its prolific Internet presence (4 blogs, a Twitter account, 2 Facebook groups, many Facebook events, and a YouTube channel), the street interventions remain a significant part of its activities. Regardless of the methods, which I will elaborate more in future blog posts, the principles of creativity, play, and non-confrontation are always maintained.

At this point, some critical questions could be raised. What is Blank Noise actually trying to achieve through the dialogue? Can public dialogue really address the issue? How does Blank Noise know if it is interventions have an impact?

When I asked the last question, many people in the Blank Noise admitted that impact measurement is something that they are still grappling with. Some said that the public recognition of Blank Noise by bloggers and mainstream media is an indicator; others said that the growth of volunteers is also an impact. However, I found that this is not an issue many people were concerned with and was a bit puzzled. After all, if one were to dedicate their time and energy to a cause, wouldn’t s/he want to know what kind of difference made?

The light bulb for this puzzle switched on when Apurva Mathad, one of Blank Noise male volunteers, said, “Eve teasing is an issue that nobody talks about. It seems like a monumental thing to try and change it, so the very act of doing something to address it and reaching as many people as possible right now seems to be enough.”

Apurva basically told me that it is the action of doing something about the issue is what counts – and that it is the personal level change among people who are active within the Blank Noise is the real impact. I recalled that everyone else I talked with mentioned individual transformation after being a part of Blank Noise intervention – something I would elaborate upon in future posts.

This observation was confirmed in a later conversation with Jasmeen, where I discovered that Blank Noise also has another goal that was not as easy to identify as the first: to allow people involved with the collective to undergo a personal transformation into “Action Heroes” - people who actively takes action to challenge the silence and disregard towards street sexual harassment. In this sense, Blank Noise is similar to many women collectives that became organized to empower themselves and hence could be said to also adopt a feminist ideology.

The difference with most women collectives, however, lies on Blank Noise’s aim to allow a personalization of people’s experience with the collective. “The nature of this project is that people are in it for a reason close to them and they give meaning to their involvement as they see fit,” Jasmeen said.

Blank Noise does face challenges in doing this. Some people found it difficult to understand that an issue could be addressed without shouting slogans or advocating for a specific solution and others joined with anger due to their personal experiences. Hence, the non-confrontational dialogue approach becomes even more important. The discussion and debates it raises help the Blank Noise volunteers to also learn more about the issue, reflect on their experiences and opinions, as well as to give meaning to their involvement. This is when I finally understood the point of “no target group”: the Blank Noise people also learn and become affected by the interventions they performed. Influencing ‘others’ is not the main goal although it is a desired effect, the main one is to allow personal empowerment.

Going back to the ‘talking back’ discussion in Taipei, Seema then shared her experiences working with women groups in India and showed how ‘talking back’ could also be ‘talking with’, engaging people in a dialogue. It need not always address the state; it could also be aiming to make a change at the personal level in everyday life. It could also be ‘talking within’, keeping the discussion and debates alive within a movement to avoid a homogenized, simplification of the activism and provide a reflective element to the action. ‘Talking back’ could also take form other than “talking”, which usually is done through slogans and placards in a street protest, petition, or statements. It could be done through art, theatre performance, and many, many other possibilities.

Blank Noise is definitely an example of these different forms and its experience shows that the difference is not arbitrary. It is based on a well-thought analysis of the issue that extends to how it formulates its objectives which is then translated into its strategies. Blank Noise is not only an example of how activism is done differently, but also on how the thought behind it is different.

As I looked around the workshop room I was reminded that Blank Noise was not the only one. A few seats away from me sat two people who combined technology and poetry to create everyday resistance towards consumerism in Taiwan and a young woman who held urban camps in India to mobilize young people to volunteer Regardless of the issue and the technology used, many digital natives with a cause across the world remind us that ‘talking back’ could be done in many other ways than “talking back”.

This is the third post in the Beyond the Digital series, a research project that aims to explore new insights to understand youth digital activism conducted by Maesy Angelina with Blank Noise under the Hivos-CIS Digital Natives Knowledge Programme.

*The photo is from one of Blank Noise's interventions in Cubbon Park, Bangalore. You can learn more about this intervention here.