Beyond the Digital: First Things First 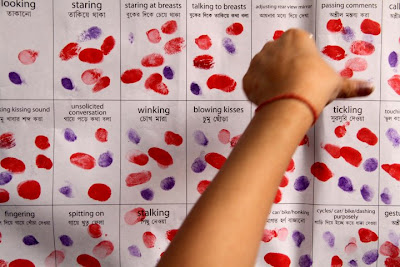 By Maesy Angelina
first posted here and here
Studies often focus on how digital natives do their activism in identifying the characteristics of youth digital activism and dedicate little attention to what the activism is about. The second blog post in the Beyond the Digital series reverses this trend and explores how Blank Noise articulates the issue it addresses: street sexual harassment.
To try to understand youth digital activism is to first understand what the issue it deals with is all about. This point is made clear by the 13 people involved in Blank Noise, who all started our conversation with a discussion on eve teasing, the issue that Blank Noise deals with and the reason for its existence. Taking the hint from them, I start sharing my research journey by sharing how Blank Noise thinks of the issue it takes. As I recall our conversations, I am still amazed by how everyone, regardless of whether they have been involved as an initiator of a 15-day Facebook campaign or as a coordinator for five years, share the following articulation

‘Eve teasing’ is a euphemism in English that refers to the various forms of sexual harassment experienced by women in public places, be it parks, streets, or buses. It takes different forms, ranging from staring, verbal lampooning, accidental jostling, or outright groping. While public sexual harassments also occur in almost every place in the globe, the term ‘eve teasing’ itself is particular to South Asia, especially India. The term plays on the biblical Eve that is considered as a temptress, playing on the dichotomy of ‘good and bad’ women and placing the blame on women for enticing men to tease them. The word ‘tease’ itself downplays the severity of the action and making it a trivial, funny, non-issue - so much that it is regarded as a rite of passage into womanhood and ignored by the authorities unless it leads to violent deaths. This term is what Blank Noise seeks to address; it aims to denounce the word ‘eve teasing’ and call it by its appropriate name: street sexual harassment.

While in the popular perception street sexual harassment happen only to young women who dress in Western fashion, actually all women irrespective of age, class, or dress have experienced it. In a much lesser degree, men also experienced street sexual harassment. However, the norms of masculinity deny their victimhood and a typical reaction would be ‘yes, I got felt up but I pity the bugger because he’s gay’ (Blank Noise, 2005).

The root of the problem is how eve teasing is internalized by all members of the society, including women. Laura Neuhaus, a 27 year old American woman who became active in Blank Noise when she worked in Bangalore for a few years, was shocked to find that the senior women in her department, who had PhD degrees and were at the top of their career, turned a blind eye to the harassment they experience and advised her to do the same. Tanvee Nabar, a 19 year old student who was one of the initiators of Blank Noise’s ‘I Never Ask for It’ Facebook campaign, stated that victims may also perpetuate the problem by thinking that accusing themselves of being responsible for the harassment because of the way they dress or behave. She said, “Even by thinking that way I am validating eve teasing, so this needs to stop.”

The problem thrives on the silence of victims, who are further deterred from speaking up by negative reactions ranging from agreeing that it’s a problem but it should be ignored because nothing can be done about it, increased restrictions from protective parents, or even offers to beat up the perpetrator to get even by men relatives or spouses.

However, Blank Noise recognizes that the issue is not as straightforward as it may seem. While some actions like groping are clearly a form of harassment, other forms such as looking or verbal taunting are not as obvious. Therefore, rather than offering a rigid guideline to what is or is not street sexual harassment, Blank Noise attempts to build a definition of ‘eve teasing’ through public polls, both online on its blog and on the streets.

Blank Noise does not advocate for any specific, tangible solution either. It is not proposing for a new legislation or service provision. Many youth experts would say that it is a sign of youth’s decreasing trust to the state, but actually this is an extension of Blank Noise’s acknowledgement of the ambiguity of street sexual harassment. Hemangini Gupta, a 29 years old Blank Noise coordinator, asked, “Should we be allowing the state to legislate an issue like street sexual harassment where there is so much grey even with how it is understood and defined - from ‘looking’ to physical violence?” Instead, Blank Noise aims at creating public dialogue to break the ignorance on street sexual harassment and change the mindset of both men and women, young and old. Blank Noise does not promote a specific course of action for women affected by the harassment either; it promotes the confidence to choose how to react to harassment.

What is unique about Blank Noise from this articulation? Some would argue that Blank Noise is unique for being the first collective that addresses eve teasing, but a closer inquiry into the history of the Indian women movements show that it is widely acknowledged as a form of violence against women. However, perhaps due to the limited resources of the movement, efforts to address eve teasing have been taken up very systematically (Gandhi and Shah, 2002). In this sense, when it was born in 2003, Blank Noise was unique for being the only group whose existence is solely dedicated to address this issue.

Blank Noise is not unique in problematizing the issue of violence against women. The women’s movements in India and elsewhere have been refusing to prescribe any solutions to the victims and identifying patriarchal mindset of both men and women as the root cause either. Yet, it is exceptional in not identifying an opponent or an entity where concrete demands are proposed to push for a tangible progress towards a change of mindset.

Intangible changes are as good as tangible ones. This might be a new characteristic of how digital natives think about their causes, but it could also be more related to their reading of the specific issue they are dealing with. Perhaps, if the issue at hand is climate change, the same people will advocate for specific solutions to the state or promote concrete behavior change. Either way, the message is clear: we need to always take into account what a digital natives activism is about and not just how they do it!

This is the second post in the Beyond the Digital series, a research project that aims to explore new insights to understand youth digital activism conducted by Maesy Angelina with Blank Noise under the Hivos-CIS Digital Natives Knowledge Programme.