TAKE BACK THE NIGHT 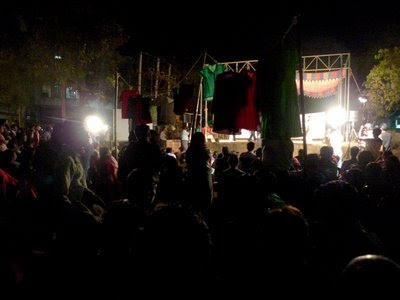 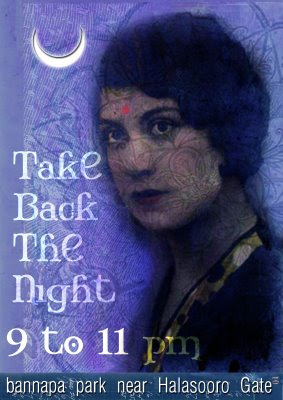 poster made by Shilo Shiv Suleman 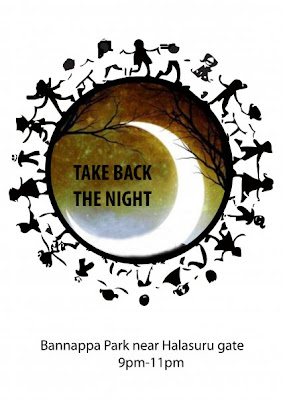 poster made by Kritika Soni

Take Back The Night invites individuals, organisations, collectives, groups all to reclaim their city streets at night.

In Bangalore: Events for the 8th of March

Join us to intervene in the neighbourhoods where recent attacks on women took place. Pick a neighbourhood and call the coordinator for location details. Volunteers will hand out testimonials; engage with the public in discussion examining how we can act against violence (bystander ‘polls’ have been made and printed already to trigger discussion); drive people to the street theatre performances by Maraa in the Indiranagar, Ulsoor locations.

TIME 9 p.m. to 11 p.m.
Take Back The Night – a celebration of the night, an affirmation of our right to move freely without threat and fear of violence. With performances, video projections, music and movement at:
Banappa Park
(District Office Road, off Hudson Circle, very close to Halasuru Gate Police Station).
Do you really think you ask for it?
Recent attacks against women in Bangalore and Mangalore have targetted them for the clothes they wore, the kind of lifestyle they seemed to espouse and the very fact that they were out as independent women on the streets at night. But women do not 'ask for it' by what they wear, who they are seen with and where they choose to be. Street sexual violence, harassment or 'eve teasing' is not restricted to one kind of woman either. Women across stratas of society, age groups have experienced it. On International Women's Day, March 8, Blank Noise launches our Clothes Project. We invite you to donate a garment that you were wearing when violated/harassed on the streets. Join us in building a clothes exhibit that will defy the notion that you 'ask for it'. Bring your garment to Banappa park on March 8, 2009, Bangalore.

You could organize a Take Back The Night in your city- Blank Noise Delhi, Calcutta, Pink Chaddi Calcutta+ Hyderabad are working towards it. Let us know! Be an Action Hero!
Posted by J at 4.3.09

Email ThisBlogThis!Share to TwitterShare to FacebookShare to Pinterest
Labels: walk the night

My Mother, Father and me were legally molested by my wife and she filed a false Domestic Violence case, is this also acceptable by Fearless Karnataka. the case is now stayed by high court.

I want to know two sides of the coin. There are women who would file cases against their own husbands falsely and is there a punishment defined by Fearless Karnataka to these false cases?