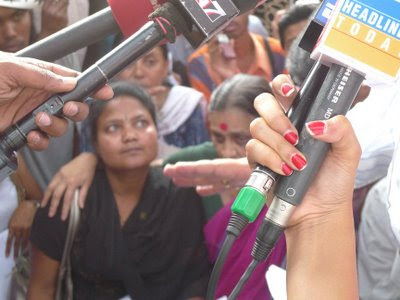 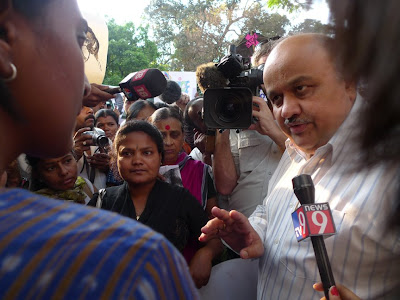 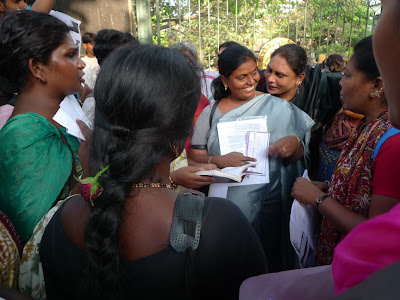 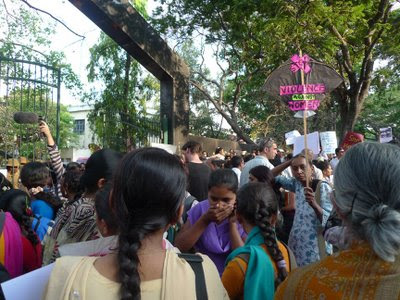 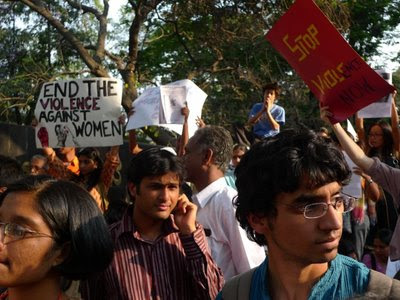 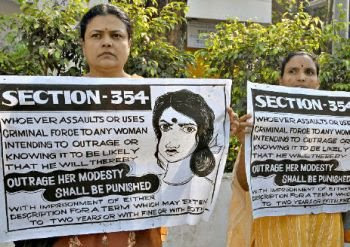 24 Feb, Lakshmi was attacked at around 9 pm by four men who
punched her, hit her, and abused her for wearing jeans.

17 Feb, two men chased Geetanjali’s car at 1.30 pm. One chased
her with a large stone as she ran to a friend’s house for refuge.

That week, Jasmine was attacked by four middle-aged men at 11.30 am
when her auto broke down. They physically assaulted and tried to
disrobe her while yelling obscenities.


Minutes of the Fearless Karnataka/ Nirbhaya Karnataka meeting with the Office of the Commissioner Police- by Aarti Mundkur.

On 2nd March at 3:00 PM a large number of people associated with the
fknk campaign gathered outside the Office of the Commissioner of Police
Bangalore City. They lined some part of Infantry road with posters on
Sec 354 IPC (outraging the modesty of women). There was significant
media presence.
A memorandum was submitted by 10 members of the fknk campaign- I will
send another email with an attachment of the final representation given
to Mr. Shankar Bidari, Commissioner of Police, Bangalore. The following
is a brief summary of the conversation that we had with him.

1) Mr. Bidari categorically stated that 3 FIRs being lodged was not an
indication that violence against women is a persistant/ constant problem
in Bangalore. He said that these were merely instances and that they
would be investigated fully. However, that the law and order situation
is very much under his control and women need not be in fear.

2) He also told us that Bangaloreans are cultured people and that it is
not possible that bystanders would not come to the aid of women, if they
were in situations of distress.

3) he would be happy to hold a seminar along with us as soon as the
upcoming elections are over.

4) Responding to the fact that women have gone to the police and that
cases were not registered- he said that this was not possible. 59
officers have been suspended for not registering cases. If in the
unlikely possibility that a case was not registered that women could
come and meet him on Monday/Wednesday/ Friday to lodge FIRs.

5) He also said that none of the complainants have provided vehicle
numbers- which seriously hampers the investigation. Especially when they
all had sufficient time to make a note of the two wheeler license plate
numbers.

6) he said he would look into our suggestion of dedication a couple of
bill boards- like the ones announcing traffic violations- to carrying
messages about violence against women.

7) According to Mr. Bidari, the law on this point has been on the
statute book for centuries and all citizens are fully aware of these
provisions. However, he was appreciative of our efforts to raise public
awareness.


about:
Fearless Karnataka is a collective of organisations and individuals who have come together to address the issue of street sexual violence. This collective was formed last week after repeated reports of assaults on women .
Posted by J at 4.3.09

It's good to see that at least someone dares to raise a voice against such misbehaviour.
I had a similar experience in the past but could do nothing about it( i guess i was too shocked or too humiliated to do anything).
I used to live in a PG at National Games Village. One evening as I was on my way to my PG, I saw a man standing near the lift with his zip opened and waving his fly at me... I was too shocked to react at that very instance...
By the time i realised what was happening ,he was out of the scene. When i went and reported this incidance to the security guard , he refused to believe me and said that there was no one around.
When I reported it to the PG owner and the secretary of the building , they said that they would investigate in this matter. Later I was told by these ppl that the security guy had told them that I was lying and that I had been sitting with a guy on the stairs a few days back, when he had caught me( guys were not allowed inside the building) and that I was making all this up because I wanted to take a revenge.
I was too shocked to hear it and protested against it. But the PG owner and the secretary told me that the guard had been there for a long time and that he was a reliable guy..
I was shocked that the PG owner was more interested in protecting her reputation than protecting me....
I tried to convince them a lot but to no avail. At last I realised that it was no use trying to persuade such blind pppl. So I decided to move out instead.