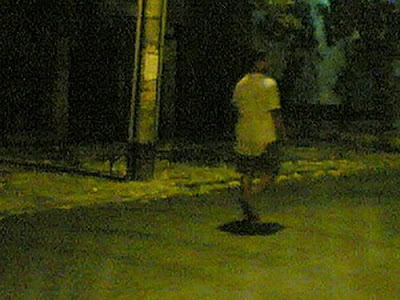 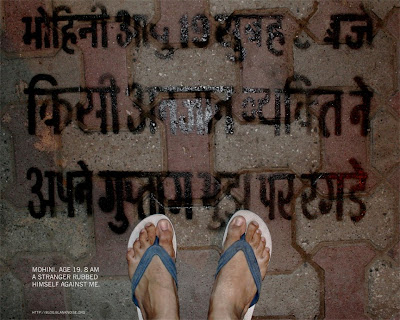 "My daughter ( 46 years) and grand daughter( 22 years) were walking by the lake. A mad man lift up his lungi and flashed his body parts at my daughter. My daughter was hoping that her daughter didnt see this. She panicked and tried to change her route. He flashed again. She yelled for a security guard from an resident apartment. In the meantime I the mad man ran away.

It is familiar to most of us. I could hear my mother, father, grandparents, uncles, aunts, friends, all well wishers say. ' just dont go there. '

How many such city spaces will not be accessed because sexual violation was experienced there?

Shabana in Manchester never stepped out alone. She never experienced street sexual harassment either.
and then again Bangalore, Tokyo, Mexico City and other cities have women only public transport.

We ask you to revisit the site and exact location where you experienced harassment and photograph it. Please send in an account of what happened with a photo of that place. This project is open to women from across the globe, across age groups.

It would be fantastic if you could get others around you involved- more so if you got people without cameras involved and even shared them.

We could organize week long events with small groups of individuals who want to participate in this.

(Amrutha Bhushan and Goonja from Bangalore will be re -visiting their site. I will be doing the same from Kolkata. If you would like to get involved from your city and get others involved too- email us!)

All photographs will be uploaded at :
http://flickr.com/photos/blanknoisethisplace

and put on a world wide map at :
http://flickr.com/photos/blanknoisethisplace/map/

To participate email us and we will add you right here. Email us at blurtblanknoise at gmail.com subject titled BLANK NOISE THIS PLACE!


Why are we doing this?

It is not about the location; it's about the nasty perv guy who gets his sexual thrills by shocking us- If we are not shocked, they don't get the thrill.

I was recently flashed on a rather busy street- there were other men nearby talking- I called to them and pointed to the flasher and told them that he was touching his (very small) self. They laughed hard and then threatened to beat the guy- the guy ran off scared and humiliated.

If we do not change our route and we call these men out, maybe they will go elsewhere.

Sorry for the rant! *steps off soapbox*