Get involved- Blank Noise Opinion Poll in your city! 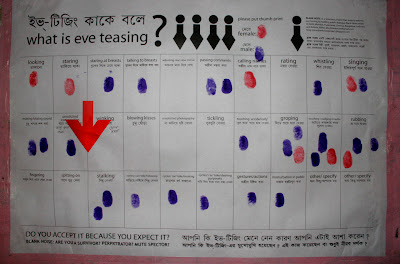 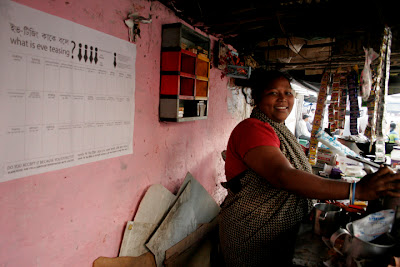 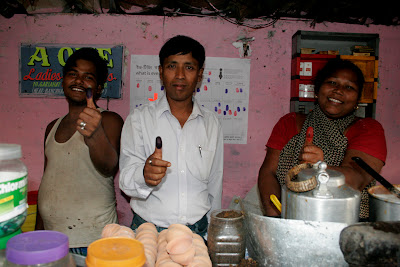 Namita Sharma's tea stall is by the auto stand in Gariahat market, Kolkata. Every evening, eva long que lines up by her tea stall awaiting their auto rickshaw ride back home. During this stretch of time some people drink tea , smoke a ciggarete, snack a bit.

Namita and her colleagues welcomed Blank Noise as an idea. Her tea stall hosts the Blank Noise opinion poll which asks a simple but infinitely complex question-

There have been innumerable debates on the blog in the past over what exactly constitutes 'street sexual violence'- Can it be in the verb of 'looking' or in the adverb of 'lecherously looking'. there are questions about what constitutes a lecherous look- and the ones who experience it will argue saying ' it's obvious. we just know!'

This is precisely the kind of discussion we want to further on the streets itself. More than for facts figures and statistics we attempt to use the form of an opinion poll to start discussions. The opinion poll also becomes a 'safe' way for people to testify and admit what they have seen or experienced.

The opinion poll is bilingual- for Kolkata it is in Bangla/ Bengali and English. We are getting them made in English with Urdu/ Hindi/ Kannada/ Telegu/ Tamil/ If you would like to volunteer with translations do email us asap! always at blurtblanknoise@gmail.com

By asking someone from your neighbourhood /locality to host the Blank Noise Eve Teasing Opinion Poll you are getting them involved in the process of taking agency, and also being an agent yourself. The opinion poll could also be in your college/ office/ apartment block/ market/ anywhere- email us- let's discuss your ideas

You will need to provide your local Blank Noise agent with 2 ink pads( red and blue) for people to put their thumb print.

In the next 2 weeks individuals/ Blank Noise members from Delhi, Mumbai, Hyderabad, Chennai, Bangalore, Lucknow, Kolkata will receive the opinion poll charts. If you belong to any of these cities and would like get started - email us right away!

If your city is not mentioned and you would like start this process in your city, write in and we could have an entire bunch sent in to you. You could also be the opinion poll distributor for your city or town.

You will also receive an email with detailed instructions on how to introduce Blank Noise/ the issue of 'eve teasing' and how this process can be documented.

Coming up is an interview with Namita Sharma on her experience of hosting the opinion poll. The interview will be conducted by members of the Blank Noise Kolkata team.

We look forward to your emails! blurtblanknoise@gmail.com

I have had quite a lot of people asking me how to join Blank Noise. The walk has created a lot of interest, especially because of the way Blank Noise works.

Yes.I am happy with the initial proceedings of BNKolkata.

Saptarshi and Dhruva! Thanks!

It would be great if you could share your experiences of walking down Gariahat after that day....

Will. Once my exam is over. Also, we are thinking of taking the opinion poll posters to colleges.

I am willing to talk to my local panwallah and grocery shop owner.

Please add 'pinching' too. Had that dirty experience when a bastard pinched my bottom on Andheri station bridge.Hit him on his back.
Did I say I was carrying a big sling bag? He must have had to bend down to do what he did.