MG ROAD. 10 30 PM. he cant stop staring, smiling, making strange faces. He comes up to my auto and tells the auto driver ' sakat figure'/ ' sexy'. Re appears at every traffic signal. The auto driver is excitedly looking out for the guy on the bike.
Shot down, I thought
and he said " thankyou!!"
I reached home after 40 minutes of trying to control the auto driver's route/ speed accompanied by a million phone calls. 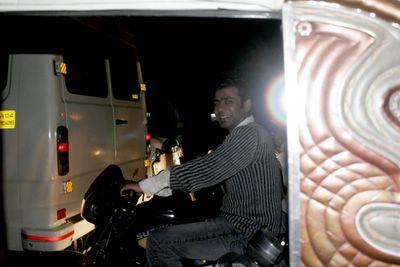 Would just like to ask a question - and I mean nothing by this - I'm just genuinely curious - what are you trying to convey by posting the pictures of the eve-teasers. I've been trying to figure out, but haven't been able to get it.

dear ttg
By putting the 'eve teaser' on the blog, I am simply exposing him to the public we create online.

photographing them and publicly displaying them reverses the power in this scenario..hence I no longer remain the weeping silent victim.

I wonder [if or rather when] this happens in Bangalore, what about elsewhere--in the less civilized places?

Seeing his grinning mug on the page makes me want to do something about such incidents. That's one of the possible effects of posting a teaser's photograph.

Bloody sicko. You should've smashed his mug rather than putting it up here. x(

wish somebody would inform the guy what a "lovely" grinning pathethic
picture he makes. his mum would sure be happy to see his face online!!!!!!!!

its a brave effort.....commendable.
..what if the guy dares snatch you or the camera??

very brave effort..commendable..but
what if the scoundrel dares snatch you or the camera!!

very brave effort..commendable,but what if the scoundrel dares snatch you or the camera!!

really good effort lady.....smtimes guys like these sure give men a bad name especially among the female species...saw ur effort eppriciated in da hindu....congrats

thats true zack. sometmes its just a joke for them...like this guy...not once will it occur to him that he will be defamed online...unlikely that he will get to know of that...

its also about 'me' being able to deal with the situation, im not on some mission to 'catch men' red handed...but to be able to confront it in my own way...and this suits me...and sometimes others too..

there have also been times when the perpetrators photographed have apologized profusely and admitted their crime. that is for me is a way of seeking justice and reversing power

good job jasmeen didi.
yr a inspiration 2 girls like me who dont know what 2 do beyond speaking back 2 such people esp in "buses".
would like 2 know as 2 how i can contribute 2 this project even in the future in a constructive way.
all the best!
hope this turns out 2 b a revolution

A very applaudable work! A great job...I do not live in India anymore, though I miss living in India many a times, but the bad experiences I had in the buses, streets,school, college everywhere possible, now i think twice to settling back in India...You and your friends have done a great job. Although I used to resist this bad behaviour , my friends used to make me feel guilty for not being womanly and for putting a bold front in dealing with such crooks. You have done a great job which no one has done so far. I wish you all the luck and hope yours and your team efforts will get the society to think for unfairly wronging the woman always ...

tsk tsk tsk!
Apologies on behalf of every man to you! :)