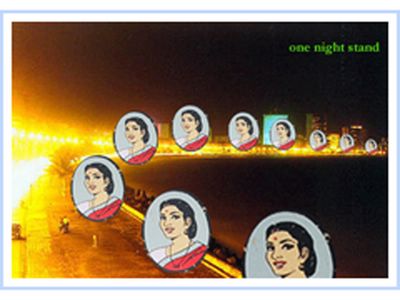 At Mumbai I met with Shilpa Phadke fromPukar. Shilpa brought up the idea of the night walk/ One Night Stand with various women's groups in Mumbai. Their enthusiasm and willingness to 'just do it' brought me to Mumbai. The

PLAN: We were to wear reflector badges and stand on Marine Drive after sunset. We were also meant to appear at the traffic signals, when the traffic would stop and form a sentence that would read, WHY ARE YOU LOOKING AT ME? Each person was to become an alphabet. The blinking orange traffic light would be the exit signal for the group.

MORE PLANS: The public would be invited to write testimonies of street sexual harassment on the city's walls, pavements. In contrast Section 354 on 'outraging the modesty' of the woman were to be pasted on the walls.

WHAT ACTUALLY HAPPENED: There were atleast 1oo women from various activist social groups. Posters, banners and women shouting slogans. Along with this were the cops on duty. The 'protest' started at 4 30 pm, on May 21st 2005 marking exactly one month of the Marine Drive Rape Case. I chose to be the passive documenter of this protest event. I was also hoping that by atleast 7 pm we could try another form of asserting ourselves there. (the performance described above.) my stand: control freak: intervention/ passive participant. Am I trying to control a situation or am I seeing where I fit in? Its not about arts vs activism excluding the real people - public from the 'issue'.

AND THEN: 7 PM. The cops are still on duty. There is still lots of singing, shouting, screaming. The women cops speak with Sandhya and Shilpa about the 'law' and about how the group cannot disturb the traffic. There were lock up threats which meant people would be locked up through the weekend. There was no group consensus on the lock up issue. Numbers trickled down. Deepa, an artist and writer based in Mumbai put a section 354 poster on one of the rocks by Marine Drive. Natasha, my friend from fotolog (www.fotolog.net/50mm) was doing the still documentation of the event while I shot the video. We had dinner at Leopold.

I came upon this blog randomly. I am not sure I understand exactly what you aim to achieve, but I commend you on your enthusiasm and commitment! Keep up the good work.

Weird. I always thought the Rettop Method was the best for generating traffic. I am going to book mark this blog, nice topics discussed

By the way... I have a Exit Traffic site. It pretty much covers Traffic related stuff.

Come and check it out if you get time :-)

Weird. I always thought the Rettop Method was the best for generating traffic. I am going to book mark this blog, nice topics discussed

By the way... I have a exit traffic exchange site. It pretty much covers Traffic related stuff.

Come and check it out if you get time :-)