To The Deputy Director of Tourism, Goa 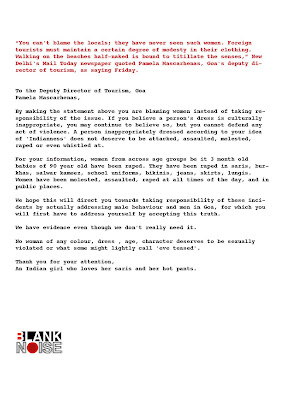 “You can't blame the locals; they have never seen such women. Foreign tourists must maintain a certain degree of modesty in their clothing. Walking on the beaches half-naked is bound to titillate the senses,” New Delhi's Mail Today newspaper quoted Pamela Mascarhenas, Goa's deputy director of tourism, as saying Friday.

To the Deputy Director of Tourism, Goa
Pamela Mascarhenas,

By making the statement above you are blaming women instead of taking responsibility of the issue. If you believe a person's dress is culturally inappropriate, you may continue to believe so, but you cannot defend any act of violence. A person inappropriately dressed according to your idea of 'Indianness' does not deserve to be attacked, assaulted, molested, raped or even whistled at.

For your information, women from across age groups be it 3 month old babies of 90 year old have been raped. They have been raped in saris, burkhas, salwar kameez, school uniforms, bikinis, jeans, skirts, shirts,lungis. Women have been molested, assaulted, raped at all times of the day, and in public places.

We hope this will direct you towards taking responsibility of these incidents by actually addressing male behaviour and men in Goa, for which you will first have to address yourself by accepting this truth.

We have evidence even though we don't really need it.

No woman of any colour, dress , age, character deserves to be sexually violated or what some might lightly call 'eve teased'.

Thank you for your attention,
An Indian girl who loves her saris and her hot pants.


I do not deserve to be violated because of what I wear: I NEVER ASK FOR IT.
We are having a clothes collection drive.

All Action Heroes will come wearing a garment they've always wanted to wear but did not wear before .

All Action Heroes will be agents, and spread the word, * bring a friend, start collecting clothes as they read this.

*Action Heroes can be male too- we call them the BN guy- and yes all BN guys can contribute too. We want our BN guys to propose ideas via which men can be involved, addressed in the issue of street sexual harassment. All ideas will be published on the blog and followed up if you commit! Are you a BN guy yet?

A big thank you in advance for linking, tweeting, facebooking and making it happen.
tweet with us at twitter.com/blank_noise

Email ThisBlogThis!Share to TwitterShare to FacebookShare to Pinterest
Labels: asking for it, blame, eve teasing, i never ask for it, protest

If anyone in the Government has half an asses spine, then Pamela should be kicked out right now.

But, sigh, this is India.

My heart goes out to the Russian girl. God bless her and help her.

The Bangalore initiative is very good. Appreciate your thoughtfulness. All the best!

I'm in Delhi, post details about the Delhi one too when you have them.

Hi J, I'm copying the text below the page break and putting up the link to this post on my blog to request girls in Delhi to visit the meet on February 27. Hope you don't mind.

Don't mind at all! By all means- do spread the word!

when will they stop apologising for molesters??
the times I have been attacked on buses, I was covered head to toe with a dupatta pasted on my chest.
and the buses were not crowded either.
who says molesters need an excuse??

Hii, J
me and sm of my frnds have started an E-zine called Reader's Quotient, it is totally for a noble cause, I came across ur blog in my quest to search talented writers and felt worth to inquire if u shall be willing to come along with us
If yes pls contact us on sangeeta.goswami@readersquotient.com

waiting for ur revert

I too have linked this post to my blog..

It really upsets me to see women suffer coz of the men around them. I too have been a victim of such deeds.

Every girl at some point in her life have been through this torture in some way or the other.

Spread some light on my Blog too after reading some :)