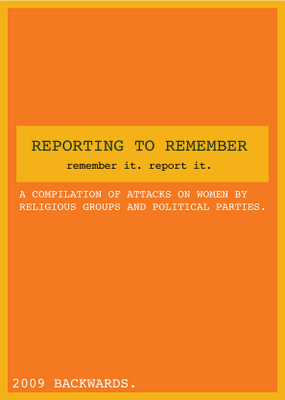 Starting with the most recent Mangalore pub attack we would like to build a list of incidents involving attacks on/threats to women under the pretext of culture, tradition and religion.
1-political parties/ religious groups/ individuals


Feb 14, 2006Shiv Sena
Nallasopara, BombayA mob of 60 Shiv Sainiks, armed with hockey sticks and rods, descended on a private party at Nallasopara on Tuesday and beat up women and children, ripped off their clothes, stole their jewellery and mobile phones and sent a few of the men to hospital.
http://timesofindia.indiatimes.com/articleshow/1416850.cms
http://blogofindia.blogspot.com/2006/02/shiv-sena-disowned-nallasopara-vandals.html
http://www.expressindia.com/news/fullstory.php?newsid=63063
http://timesofindia.indiatimes.com/articleshow/msid-1420117,prtpage-1.cms

2. Human rights activists Angana Chatterji and other female members of the Indian People's Tribunal on the Environment and Human Rights threatened with rape and disrobing, as they take deposition of stories about attacks on minorities. Chatterji later threatened with rape, murder, dismemberment for speaking up.
http://www.sfgate.com/cgi-bin/article.cgi?file=/chronicle/archive/2005/06/23/MNG7ADDAE11.DTL
http://www.hrw.org/en/news/2005/07/12/does-rss-have-any-moral-standards
http://timesofindia.indiatimes.com/articleshow/1156238.cms
http://www.thehindu.com/2005/06/15/stories/2005061506381200.htm

14th Feb,2006
http://www.hindu.com/2006/02/15/stories/2006021523280300.htm
The Shiv Sena staged a protest against Valentine's Day in Kamla Nagar, Delhi "dubbing the Valentine's Day as a marketing gimmick".
The state unit of the National Panthers Party had come out against the Sena, and representatives of the same went around armed with chilly powder. There was sign of trouble in Connaught Place as activists of the two groups came face to face outside Wimpy's but timelpy police intervention prevented any untoward incident.
11th August, 2008
http://www.hindu.com/2008/08/11/stories/2008081161540300.htm
Mr. Ram Dev Yadav killed his wife Geeta and her alleged lover neighbour Jitendra in the Dabri area of Delhi. The crime, committed on 29th July, came to light when the couple's 5yr old son Vicky narrated the gruesome incident during trauma counselling.
nandini raja reports:
October 30, 2008: Bajrang Dal activists attack two
undertrials in Mangalore district sub jail; sixth such attack after
its chief Mahendra Kumar's arrest on September 20.

January 7, 2009: Laddoos distributed in some schools across the state
on Vaikunta Ekadashi. Congress demands biriyani should be distributed
on Ramzan.

January 19, 2009: An arrested dacoit reportedly confesses links with
radical Hindu groups and admits to carrying out the Hubli district
court bombing before the May assembly elections

October 2009- Feb 2010- gangs of men from various right wing Hindu groups such as Sri Ram Sene, Bajrang Dal, Hindu Rashtra Sena, Hindu Jagaran Vedike in Mangalore , Karnataka, assault Hindu women dating Muslim men. They also attack Muslim men and accuse them of waging a 'love jihad'; that is, according to them, a strategic love plan to convert the hindu girl to islam.

Email ThisBlogThis!Share to TwitterShare to FacebookShare to Pinterest
Labels: announcement, asking for it, i never ask for it, local agent, moral police, participate, question, report, reporting to remember

Will anyone dare to do such disgusting things to protest burkha?

Will anyone dare to protest when the Pope says AIDS is the fruit of sin?

Will anyone dare send any kind of underwear when christian missionaries force a young tribal to convert in exchange for cash?

Are Nisha Susan and her commie pals sending undies to Pope or the Bible Society for asking people to destroy non-Christian places of worship? (This incident of Bible manipulation in Jharkhand was widely reported in mainstream media in mid2008 -- search the web.)

So many questions, so few answers.

Can these anti-Hindu people, who are making fun of some of Mr Muthalik, ever protest like this against Islamic burkha or purdah system? Not if they want to live. So they prefer to go after softer targets – the poor Hindus.

If the Hindu somehow survives a terrorist, these seculars will get him or her!

We Indians cant leave religion out of anything. The attack was on Indian girls and not on Hindu girls or Muslims girls. But they all, irrespective of their religion or even country are united against SRS. Does that say something to you? Not only women, men (real men and not cowards who would hit women)are with them.

your comment makes little or no sense. why would 'nisha susan and her commie pals' send undies to the Pope or in protest against the 'burkha system' (and who they send those undies to?) - there is a particular reason for the choice of "chaddi": a subversion of the right-wing khakhi chaddi so closely associated with the men behind the mangalore assaults and so many more. the chaddi in this instance is not a random article of clothing.

hi
keep it up susane, you are doing good job, we people have to set hindus ( womenwho are going to pub) and hindu( who are supporting sri rama sena) aginest each other.
this is the begaining we will vanish sri rama sena soon by creating a people hatered againest it.keep it up, god support you in all the way

People like Nisha Susan or Hemangini just want to show-off in front of their western friends or within their group that they are very "secular", "progressive" and "liberal". That is all this pink chaddi campaign is about. Nothing more. Their expression of outrage is nothing but a case of crocodile tears. Let me explain.

A few days back, a six year old girl in UP was beaten up by a police officer. This incident is more serious because the offender was a guardian of law. And since the victim is a girl (albeit a kid), one may expect blank noise to at least show some outrage. But that has not happened. No outrage.

This shows that these people get "selectively outraged", which in itself exposes the shallowness of this entire pink-chaddi endeavor.

I would like to see these pink chaddi walas and their enablers in the media take a stand against the muslim goons who forced the government to ban "The Satanic Verses" and intimidate the author Salman Rushdie who had to flee the country exactly 20 year ago. All freedoms including the freedom to go to pubs begin with the freedom of expression. Valentine's Day is the day to mourn our loss not celebrate kitsh like Valentines Day.

There have been other attacks,other crimes in this country.Some have been more brutal than the Mangalore attack.However,it makes no logical sense to say we shouldn't protest this cause because of that.This attack has happened to people whom we know..people like us ..so we feel the impact deeply.

I don't see what religion has got to do with this protest. It's a protest against goondas attempting to enforce their constricted view on Indian women.

Happy Valentines Day to all :)

Thanks for this great article. This is my first post and I am so excited to post here. Well I like this site. It is very informative and I will visit this site in future too.

Hey who's the bloody disgusting pig fucker making false accusations against the best religion in the world (Christianity)?
Douchebag. If I find you I will kill you.
Better shut your fucking pig mouth.

why is it so hard to understand that just because we arent protesting what YOU wish to protest doesn mean we dont feel bad for the poor child. Also, its not selective outrage....why dont you, kind sir, start a movement that we can join? i assure you, wherever u stand up to protect the rights of anyone deprived of it....people WILL come forward. Just dont sit by and expect the mythical "someone else" to come forward and start EVERY damn movement. this is not to show that i am ""secular", "progressive" and "liberal"". sply not the way you perceive these things.