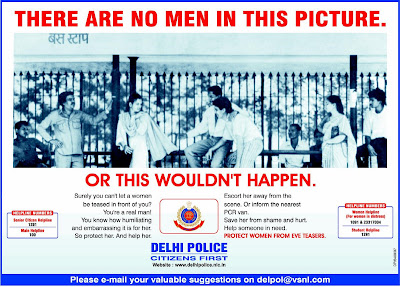 Both images have been sent via

Look Out!! While driving, walking, being stuck in traffic...

It could be anywhere and in any city or town. On a bilboard, in a magazine, on the back of an auto or taxi, on your best friend's t shirt, on the tele, in a movie hall...anywhere!

Do these images amuse you or confuse you? Do they make you angry?

In the Blank Noise spirit we invite you to start questioning the politics of public communication in our everyday life and in our cities.

Who is communicating? To which audience? What is the explicit and the implicit message? What does it say to you about YOU?

Look Out NOW, photograph it and email it to us! You can also send in text to start a debate.

Yes it's not always about 'eve teasing', but it is about reinforced attitudes of relationships between men, women, and cities.

Atreyee Majumder:
I was appalled that there was no mention that such behaviour can be criminally punished, and women should take action against these harassers by coming to the police, what is the whole point of the ad then?? Coming as it does from the police!
And of course, underlying the ad is the perception of women as weak and vulnerable, who need to be 'protected', that too in the interest of "shame to the community" that would be caused otherwise, and not so much in the interest of safety of women, right of women as citizens to access these spaces. I smell an over arching sense of women as 'belongings of the community' than as autonomous subjects of a democracy.
Twilight Fairy:
"Dont you know how ashamed and embarassed women fell when they are teased? Please protect them and take them away form the scene when this happens"
ashamed?? embarassed? I mean isnt it the eve teasers who should be feeling all this and more? (ok we dont live an ideal world). But even from a female POV.. angry, harassed, provoked, annoyed, frustrated.. these are what women feel... Delhi police guys need to take some lessons from their own female colleagues.. and just what are these female colleagues doing with statements like " take them away from the scene" going through right under their noses into print media!
Abigail Crisman:
These are all stereotypes which reinforce the macho mindset which causes most of these problems in the first place.
It shouldn't say, "there are no men in this picture", rather it should be "there are no human beings in this picture" because no one should be able to stand by and watch another person being belittled and harassed for fun--whether male or female.

BNP Chennai. Take action against Sekar's now. Get the ad pulled down and create a noise in the media letting everybody know that such blatant disregard for women's respect will not be tolerated. Create a hullabaloo around the issue.

WTF!!! How could that 'get used to eve teasing' even make it to billboards? BNP chennai needs to do something about it!

The second pic.. again.. as many things have been, is debatable.

This ad can be viewed positively as well.. but then, my feeling is, the frontrunners of this movement take it negatively. It's best expressed in these lines:

<< I smell an over arching sense of women as 'belongings of the community' than as autonomous subjects of a democracy. >>

Too many big words there, and I am not sure, if the person has actually thought about them deep enough. Is any citizen autonomous? Isn't everyone a part of the community, and is a 'belonging of the community'? Don't individuals and community/society influence each other? So, what is "autonomy" here? Most importantly, from where did democracy come into picture?

Looks like some people have an issue when women are projected as entities that need protection. Apparently, that makes them look weak. Let's have some reality check.

The anti-dowry laws are in place, to not just punish the offenders, but also to act as deterrents. Don't women deserve this protection? No matter what some of the elite urban women think here, ground realities are that, they need men around. Don't women look for a man with a stable income, reasonable maturity, when they choose their life partners? Why? SECURITY. Simple right? Women seek security.

Irony is that women need men to protect them from men!!

100 women may protest against sexual harassment, but if not a single man raises his voice against these, nothing will change. So, there is nothing wrong in imploring men to speak up against this evil. Because, the eve-teasers are more likely to listen to these sane voices of men, than the cries of women's pain. Simply because, those cruel men enjoy seeing women in pain.

I think second ad is not negative. Isn't it a truth that the best way to avoid eve teasing is for a man or grp of women to help the woman in distress? You may argue that society should be changed and stuff. Alright we should aim for that and work positively towards it. But what do I do when I see some loafers chasing a woman ? Shut my eyes and pray to god to change the society ? or walk aways thinking it is the freakin society again ? or intervene and protect her and move her to safety ?
Come on don't be ridiculous. I mean it is alright to be ideal but we live in a ideal world and instead of praising delhi police and yet asking them to change the tone a bit and add some lines like "Eve-teasing is crime and punishable" you are bashing it ? How stupid can someone get to hurt their own cause ?