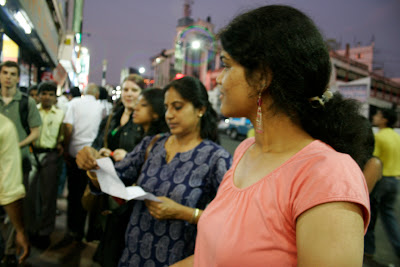 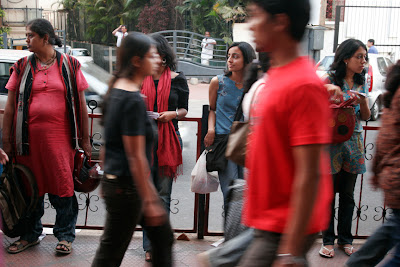 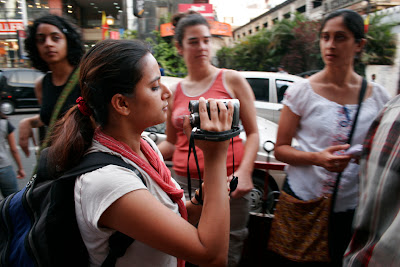 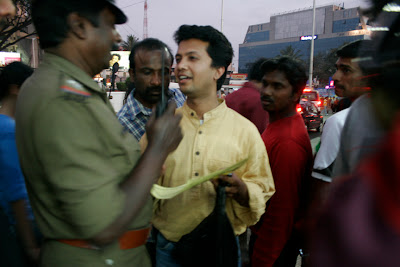 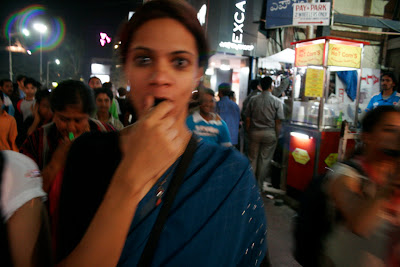 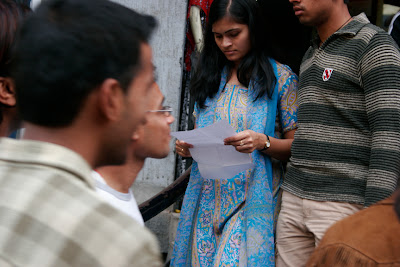 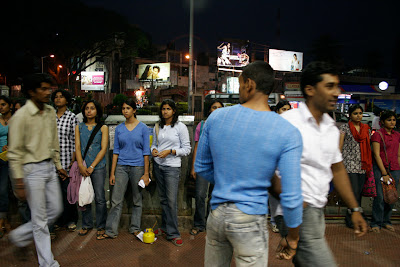 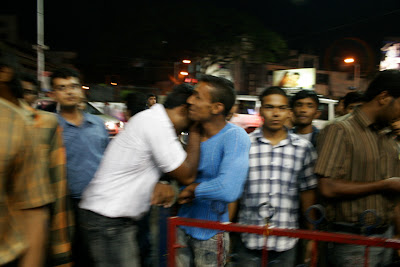 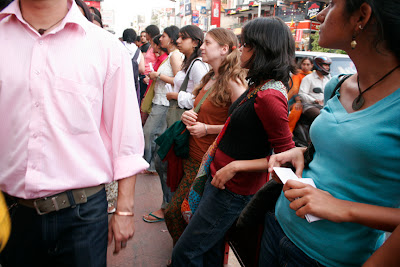 This was the last of the One Night Stand production! For two weeks everyone, Paige, Surabhi, Dev, Kunal, Laura, Yamini, Manisha, Amrutha, Anusree etc etc etc worked hard on putting this event together!

As a result we had a good turn out of about 50 Action Heroes!

Here's what we do and why we do it:

Brigade road , just like any other road is male dominated- whether in numbers, attitudes and hence the power dynamics.

The railing was probably constructed so that people did not spill onto the road but over time it became the place to hang out, lean back, relax, check out, make deals, be idle. However all of this was allowed if you were male.

As a result a woman's experience of walking down the street was to look down, be anxious, and walk as fast as her legs could take her. This does not imply that every man by the railing was present to violate a woman, but in general it was just a very male dominated sight.

Of course there have been instances of a man standing against the railing and rubbing himself off on every woman passing by. I would not have known this until an Action Hero experienced it. A self explanatory video will be uploaded soon.

The point is not about the railing, nor is men vs women. We are attempting to question women's relationship with public spaces.

What would happen to the street if for one evening women took over the railings?

What if our only intention was to do nothing, lean back and relax?

What if we looked back at passersby?

What if 50 women stopped walking and stood straight, firm, shoulders head and feet in one place?

What if we decided not to give way, dodge and twist our bodies for others to move?

What if, for one evening every body else moved around us?

In an ideal world there should be no reason and no need for this performance. But the fact that 50 women by the railing doing nothing becomes questionable, generates curiosity, becomes a public debate, is reason enough for passersby to get familiar with the idea.

It was a noisy exit. We left the street with an alert alarm that was almost deafening. 50 shreaking whistles down Brigade Road.


Here's what the Action Heroes had to say about their experiences on Feb 11:

This was my first Blank Noise intervention. It felt so good when I maintained eye contact with a guy and he looked away. I felt so empowered! It was a little unsettling at first to be stared at as if I was a freak show but I soon got into the spirit. I can’t wait for the next time!

This was my first Blank Noise intervention and it really built my confidence. I really hope this can be carried forward in Yelahanka, where we really need it.

The whistling thing really worked for me! It made everyone curious and they actually made way for us, which in the usual circumstances wouldn’t have happened.

I think the eye contact really worked because it gave a sense of awareness, confidence and power.

A couple of days later we receive an email:

Two sundays back, i saw around twenty girls blowing their whistles through brigade and i was fascinated. I followed them out of curiosity and the last girl in the line handed me the letter addressing a stranger, signed by a girl. However, there was no contact number or email address. I asked around and finally found out about Blank Noise.

are you all feminists?

what does feminism mean to you? what all does it stand for?

I came looking for you guys that evening, waled down all the way from M G Road to Nilgiris, but there was no sign of you! Where were you guys?!

well male or female, these days everybody just wants attention.
well i dont understand this social experiment, would have been better if it was a natural occurance, instead of every body goin "no look at me look at me , im this and im doin that!!!!"
well im sure you have with a little video shown some freak whos rubbing his crotch, so what is it you are trying to tell everybody else,a) all men are like that or b)we found a freak.
anyways so what action did you guys take on this guy other that video tape the kiny event.you never mentioned about that on your blog.

they must have been against the railings?

feminism?..hmmm...its the ugly woman's way of getting back at men cuz men ignore them and all the other hot chicks around them look down upon them and they have no friends?...thats what i thought feminism meant.

you all looked HOT standing at the rails though! :)

ugly woman's way of getting back?

well. feminism also addresses the breaking down of stereotypes-

look out for the guerilla girls-
http://www.guerillagirls.com/stereotype/index.shtml

polyana- next time if youre looking out for us and dont see us- phone us?

haha, good advise to pollyanna, just call them when you don't find them!

Wow, what a powerful idea. That you did this is truly beautiful. I love your site.

listen up kitten,
do you know who stands on sidewalks against railings? i just hope your parents dont see those pictures. find a boyfriend and get into a relationship,atleast then you wont have to pretend you " know all about men" .

... and of course that last comment would be anonymous.

Dear 'm',
i must have really hit a nerve ;) if all of your comeback was i am anonymous( as if that completely undermines the credibility of anything i said).
and ofcourse you are completely "out there" by having a profile that says you are from Uk and your name is 'm'.
you are WAY better than anonymity :/

my my i must be such a hypocrite!

While I appreciate the reason behind this very project, a small piece of information or rather an advice to all the females out there. Male dominated society doesn't necessarily mean the females are on the receiving end. How many of you have ever heard of guys getting groped or touched by the ladies ? Well, I understand and hope you wouldn't have attempted those stuffs. Or you don't have any good-looking male friends with Virgo sunsign who could recite you his unfortunate or fortunate experiences. T.N., Karnataka, A.P., W.B. & Assam - the women are the same. Even with their relatives or husband standing beside, they wont hesitate giving a shoulder touch or rubbing their breasts on the back, most of them in their 30s. You all talk about eve-teasing, but even when doing my 12th, I wasn't spared by those giggling backbench fools. You want to see a piece of the 'bad mama' part of the female hormones, come with me for ride.

Think of this situation. How will you feel when one of your close friends openly tells you he'll never walk with me or party together because I get all the attention. Though it was during my college days, I literally can see it happen with me even now, except that they convey the information indirectly and smartly. Also just think of tying knots with an extremely possessive woman and going for a stroll in a busy street!

It's just one-tenth of the saga I have recited. There are some serious incidents which are good to be kept to myself as I dont want you to hate yourself.

This thingie..blank noise....is just a propaganda thing. After reading,seeing u pics...etc i dont understand whats in all Gods earth made u people go to Brigade Road...for heavens sake....its one of elitest places in india.1 in a lakh places are like it. Women in Rural India need ur help. But they live way far from where u people gather to sensationalize the public. Ur intentions,ways,leader everything needs to be changed, then only it will be of ANY results what so ever. Women get gang raped some 100 miles from Bombay and not a single post or action from u people. Pathetic..i must say...or rather u want to just be in those happening places talk about vague things like 'being a woman,essence of womanhood'.One more thing, if u are fighting for ur freedom to do anything, we do u want to curb the freedom of a male to look where he wishes.Who are you to ask for such a control?This is not equality in any sense that you are fighting for. If ever u are decided enough to take a real problem in ur hands...do drop a mail at mail2shiva009@yahoo.co.in.

I do not think that the predominant issue is being discussed here by the "anonymous" (and BTW is it a subtle marketing for yourself in anyway ;), sorry that was a joke and don't take it offensively)

The BlankNoise project if I am not wrong targets to find innovative solutions for women who find it insecure walking down the Indian streets or places without being stared at (pls note "not being looked at"), without being whistled at, mocked at, groped at, what not!!

I agree with your project team that women should be made more self-aware of such things and they should be made to feel confident about themselves because what takes the most hit about such situations in most of the cases is that the affected person (woman) loses the most critical part of one's life, the confidence in oneself. It's a helpless situation.

Good luck to your project and wishing that more such innovative solutions be taught to women across all sections of the society because this sort of harassment not only applies to the women who walk down brigades during a weekend but also applies for the house maids, ladies working in a store, etc.